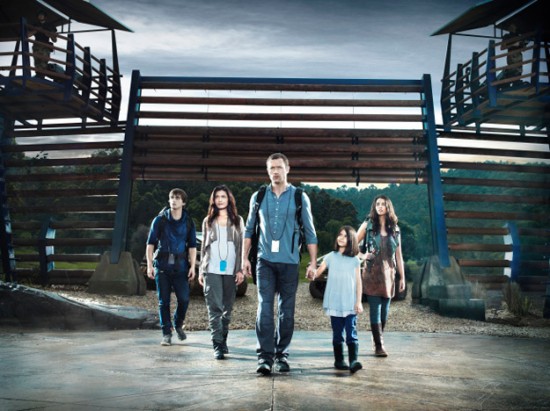 Everyone’s favorite show about ridiculously attractive people time traveling and also dinosaurs, FOX’s Terra Nova, has been canceled. Though the show had Steven Spielberg and Peter Chernin as executive producers, this isn’t exactly coming as a surprise, as the ratings weren’t ever as attractive as its cast, and the show had a fairly large budget. For fans dismayed at the thought of losing one of the only shows on television prominently featuring dinosaurs, there’s still a bit of hope, as the studio is said to be aggressively looking for another network to host the sci-fi epic.

Terra Nova wasn’t particularly great, and its cast wasn’t the most believable (unless you believe that everyone in a dystopian future is forced to time travel into the past due to air so polluted it is poisonous is super model attractive), but Terra Nova had a big budget, dinosaurs, brightly-colored and engaging sets, and the writing and plot progression was regular enough to be acceptable to watch while you ate dinner.

While the studio is shopping the show around, that doesn’t necessarily mean it’ll find a home, as the aforementioned large budget, that of 4 million bucks per episode, is around double the cost of regular episode of television and the show didn’t return the best ratings television has ever seen. Terra Nova was only averaging around 2 million viewers per episode, but when DVRs were included, the viewers shot up to around 10 million, which normally would’ve been good for a show to be renewed, but the large budget changed the circumstances. The New York Times points out that the 2 hour pilot for Terra Nova cost $16 million to produce, whereas, for instance, the pilot to Lost — another ambitious show shot on location — cost around $12 million and the show went on to regularly nail ratings and captivate audiences.

Unfortunately for Terra Nova, however, while entertaining, aside from the visuals, the show wasn’t spectacular; it was fairly regular. The pilot featured a dystopian future so heavily polluted that when a crack in time was discovered, the population was being systematically sent back to the past to live cleanly enough to make sure the future didn’t get so ruined. While the bright jungles and blue skies of the past were easy on the eyes, the dystopian future setting was actually pretty great, and we only saw it around twice. The episodes followed the formulaic television approach of stand-alones, with a muted overarching subplot in the background that was visited for a few minutes at a time in most of the episodes, compared to, say, Lost, which regularly featured the overarching story about as much as it focused on other things. Ultimately, if you missed an episode of Terra Nova, but tuned in the week after the episode you missed, you wouldn’t be at a loss for what was going on in the show. Though that is the backbone of popular shows like Law & Order, which are specifically tailored to allow people to miss episodes so they don’t feel pressured to catch up to the current one, that mentality probably hurt Terra Nova more than it helped, because the show was actually trying to tell a story and build character development, and it doesn’t help when that’s the point of your show, but you mold it so that very story and character development you based your show around is, for all intents and purposes, missable any given week.

Even after all that, though, there was something fun about tuning into Terra Nova every week, whether it was watching the ridiculously attractive cast running around jungles for an hour, or getting to see dinosaurs with high quality production values terrorize all those attractive people. Hopefully the studio can find a new home for the show without significant cutbacks, and we’ll get to watch dinosaurs once a week sometime in the near future.