When asked, the shark shrugged and said that he couldn't afford to live in Manhattan anymore. 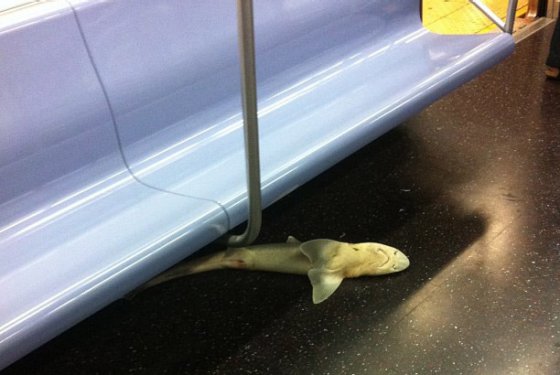 Angry science junkies may have boycotted Discovery Channel for airing that completely bogus Megalodon documentary, but apparently the Universe won’t allow us to let go of Shark Week so easily this year. Or, at least, this dead shark that showed up on the N train last night in New York City didn’t. We’re sorry, Shark Week.

According to a tipster at the Gothamist, the entire subway was abuzz with this unusual discovery. “One of my fellow passengers remarked ‘I’ve been riding the subway for 15 years, and this is the weirdest thing I’ve seen. And I’ve seen EVERYTHING.'” Eventually MTA officials asked everyone to leave the car so they could figure out what happened.

So where did this shark come from? No one knows yet, though sharks aren’t completely foreign to New York — my best guess is that somebody fished this little guy out of the East River and then accidentally left it there. Either that, or maybe the sharks’s just trying to get home to Astoria. It’s certainly got the same glum look on its face that every other subway commuter has already.

(via Gothamist, image via @bsanchz)