If you happened to tune in to the beginning of Discovery Channel’s Shark Week programming last night, you might have caught an unusual documentary about a group of scientists trying to catch a megalodon off the coast of South Africa. Why’s it unusual? Because megalodons have been extinct for over 2 million years. Yeah, that’ll piss off a few nerds.

In case you never went through a shark phase in your youth, let’s drop some basic knowledge: megalodons are more or less the prehistoric ancestors of our modern sharks. They were about 50 ft long in size and had the most powerful jaw of any creature that ever lived. They’re also dead. Like, all of them. There are no megalodons terrorizing the coast of South Africa, not even a little one.

Of course, since when has a thing not being at all possible ever stopped a cable channel from producing an imaginary documentary about it? There was the one about mermaids not too long ago from Animal Planet, and then there’s Ancient Aliens on the History Channel, and need we remind you that the L in TLC stands for learning? Look what that channel’s doing now!

With that in mind, I’m actually surprised that this is the first time the Discovery Channel has gone forward with this type of programming. But go for it they did with Sunday Night’s Megalodon: The Monster Shark Lives (spoiler alert: it doesn’t). This official clip from the studio that created the “documentary,” Pilgrim Studios, gives you an idea of what the rest of the hour was probably like:

But was there anything true in this program? According to Discover Magazine: nope, not at all. Every scientist was an actor and none of them were based on anybody who ever existed. There was never a fishing vessel that mysteriously went missing or a whale body that washed up on shore. And yet, the hour-long program operated under the premise that the megalodon, which they called “Submarine,” was alive and well and living in the ocean somewhere. Any disclaimer to the contrary was vague at best and noncommittal at worst: 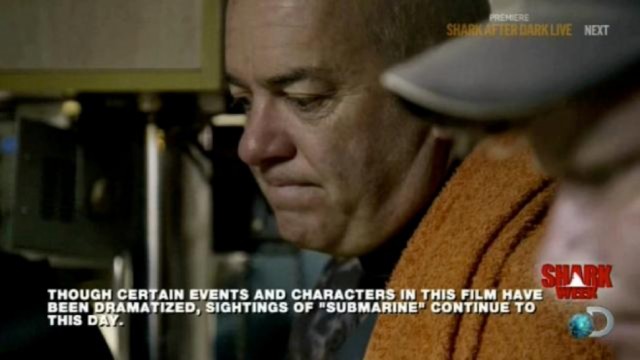 Here the word “certain” is given an alternative definition of “all.”

So did it work? Well, we’re not sure about the ratings just yet, but Megalodon definitely convinced a whole bunch of people that “Submarine” the shark was out there. Discovery Channel even took an onlie poll, knowing full well that it was completely fake — and 70% of  the people who took the poll said they now believed in the existence of a modern megalodon. That poll, by the way, was quickly altered afterwards, so clearly Discovery Channel knows they did something wrong. Too bad the Internet is forever and Discover Magazine got the screencaps first!

Naturally, those who care about the sanctity of Shark Week were up in arms, and flocked to social media websites to express their rage:

As a scientist, I have completely lost faith in @Discovery trying to pass off #megalodon as real science. pic.twitter.com/YDGiYObyA2

Very disappointed in @SharkWeek. What happened to raising awareness and respect towards REAL sharks? This big-foot crap is BS. #megalodon

Rather sad. #sharkweek has always promoted the scary side of sharks but could still count on real facts…until now. #megalodon

took this at the beach. indisputable evidence of #megalodon pic.twitter.com/8cO4m3BLFP

Wil Wheaton in particular had more than a few choice words on the subject, which he posted to his website:

I care about education. I care about science. I care about inspiring people to learn about the world and universe around us. Sharks are fascinating, and megalodon was an absolutely incredible creature! Discovery had a chance to get its audience thinking about what the oceans were like when megalodon roamed and hunted in them. It had a chance to even show what could possibly happen if there were something that large and predatory in the ocean today … but Discovery Channel did not do that. In a cynical ploy for ratings, the network deliberately lied to its audience and presented fiction as fact. Discovery Channel betrayed its audience.

Personally, I’m with Wil on this one. I for sure wouldn’t have needed an annoying horror movie gimmick to get me interested in a bunch of giant prehistoric sharks. Megalodon are pretty effin’ rad on their own — did Discovery really need to pay a bunch of actors to get thrown around in a fake storm and confuse a whole bunch of viewers who wanted to learn something new?

Thankfully Snopes is already on it, of course:

Did a Megalodon capsize a South African fishing vessel in April 2013? http://t.co/UPMUTQkh5q

(via The Verge, image via Pilgrim Studios)