Octopus Found on England’s Highest Mountain, Clearly Only a Matter of Time Before They Invade 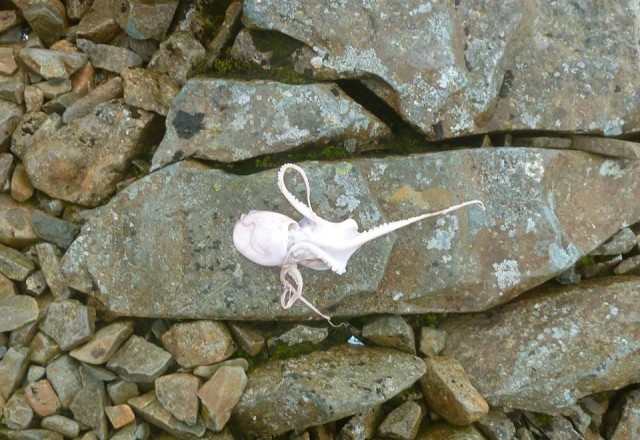 You know how when you think of an octopus, you generally imagine it zooming around in the water? That’s probably what the volunteers who attended the Scafell Pike Litter Pick in Cumbria, England thought, too — until they came across one near the summit of the mountain. Huh. I guess that’s a thing that can happen.

Scafell Pike is home to the Three Peaks Challenge, an event where participants walk to the top of the three highest mountains in Scotland, England and Wales within 24 hours. If that sounds nigh impossible, it’s because you’re not taking into account how tiny British mountains are compared to ours in North America — Scafell itself is 3,209 feet high, which is only 3/5 of a mile.

No matter how tiny the mountains are, climbing up three in a row is still a pretty exhaustive way to spend your time, which is why there’s always so much litter left in the wake of these events. Volunteers removed up to 10 bags of garbage — or rubbish, if you want to be posh and British — from the mountain during this particular litter pick. Including an octopus. Who even throws out an octopus?

Mountain Leader and litter pick-organizer Dave Ascough has theorized that the octopus might have been carried up there by a gull or some other bird. That doesn’t sound cool enough, though, so I’m going to pretend instead that it came from the Octoshire and was charged to carry the One Calamari-Ring up a mountain for the good of all Octopus-kind. Doesn’t every species in England have an evil Sauron they’re supposed to be thwarting? Nope? Okay then.