As you all know by now, Discovery Channel ruined Shark Week forever by airing a fake documentary about fake Megalodon sightings by fake people. Let’s pretend that they instead produced a real documentary about what Megalodons were actually like — what would you have learned from it? Well, maybe some of these awesome facts.

According to measurements extrapolated from tooth fossil records, the length of an average adult Megalodon could be anywhere from 45 to 55 feet, sometimes even up to 70 ft — making it three times larger than a great white shark and half the size of a blue whale. Scientists also tend to agree that these creatures weighed an average 47 to 103 tons, with larger sharks needing bulkier bodies to support themselves.

The Megalodon “documentary,” of course, supplied their own numbers instead. 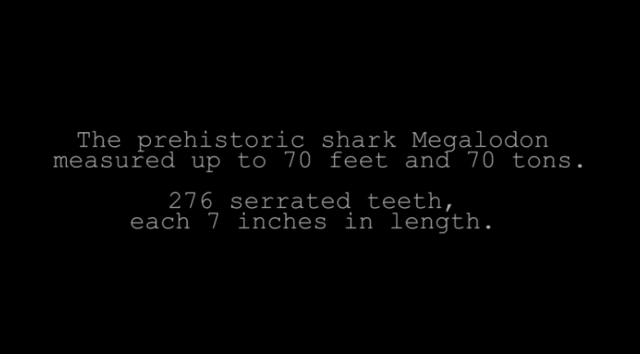 Why suggest that a 70 ft long creature would weight 70 tons when it would probably weigh closer to 100? Because having a bunch of sevens in short succession just sounds better. Clearly they were taking a bit of poetic license, which I guess is a thing that Discovery Channel allows itself to do now?

It’s not all lies this time, oddly enough: they did get the number of teeth correct. Which brings us to our next point:

Megalodon teeth were the most awesome teeth to ever tooth

In my opinion, the biggest problem with the Megalodon documentary (you know, in addition to it not being a documentary) is that by operating under the standard “monster hunting” premise, it doesn’t give the viewer much insight into the most interesting thing about the Megalodon: how rad their teeth were. I mean, sure, maybe it’s initially more thrilling to watch a bunch of people freak out that they’re going to get chomped to death, but you miss out on all the more subtle, psychological terror of knowing exactly how those teeth operate. Which is really too bad, because again, Megalodon teeth are literally the coolest thing ever.

Here are some pictures of the typical Megalodon tooth fossil, courtesy of Stormblast2008 on Flickr: 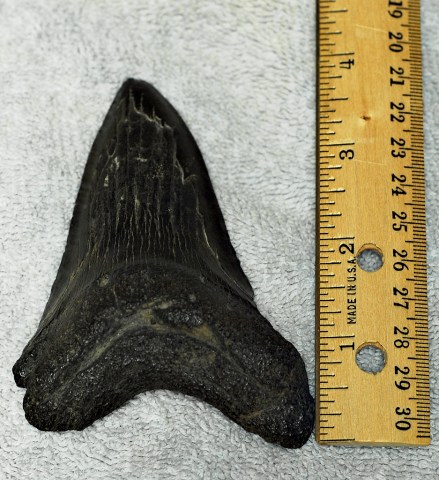 It should be noted that when most professionals talk about tooth length, they’re looking at a diagonal measurement, not the vertical as seen in the above picture. This is a pretty small tooth in comparison to the 7 inch length that gets bandied about, but it fits well within the standard rage of 3 to 7 inches. Plus, it’s got serrated edges that will still cut you if you’re not careful: 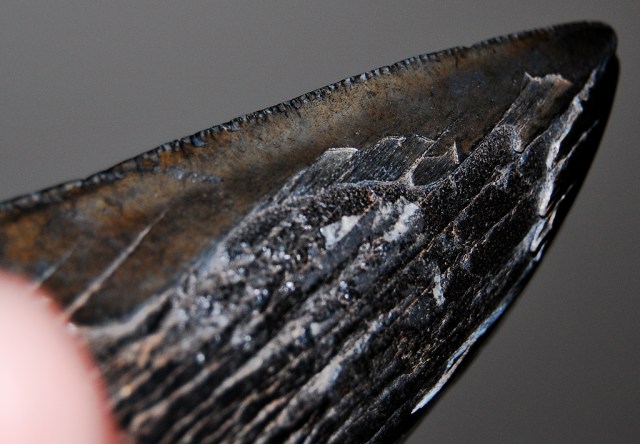 That’s right, this thing basically had knives for teeth — giant knives the size of an average human hand. Holy shit that is cool, you guys.

And then there’s the actual biting power of the Megalodon, which researchers in Sidney, Australia decided to analyze in 2008 by using complex 3d models of the shark’s jaw. They found that while the average great white shark has a bite power of 1.8 tons, the Megalodon’s is six to ten times that, between 10.8 and 18.2 tons. Compare that to the Tyrannosaurus Rex, which probably only had a bite power of 3.1 metric tons. Spend an hour trying to wrap your brain around that, and then come back and tell me that watching completely fictional sharkologists do — well, anything — is more interesting than the horrifying nugget of knowledge I just shared with y’all.

They are all totally extinct, so just get over it.

So I’ve seen more than a couple of people make the argument that the Megalodon might still be out there in the ocean’s murky depths, since we’ve only explored about 5% of the ocean and have yet to uncover all the different forms of life that lurk within. These people tend to cite the recently rediscovered coelacanth as proof of the Megalodon’s continued survival.

Well, here’s the thing about the coelacanth, folks: other than the fact that everyone thought they were extinct until quite recently, they’re not that exciting — I mean, not in the same way that a 50 ft long giant-toothed monster of death is exciting. Sure, the current species of coelacanth can reach up to 6.5 feet in length and sometimes weight 200 lbs, and they’re widely considered to be a key evolutionary step between fish and land-dwelling species. But there’s also only a thousand or so of them left, and they mostly keep to themselves off the coast of Indonesia and South Africa in water that’s thousands of feet deep– which is why it took us so long to find then again in the first place.

The Megalodon, in contrast, lived basically everywhere; fossils of their teeth show up in literally every warm-water ocean of the world. So if they’re still out there somewhere, then why haven’t we found a real one yet? It’s pretty unlikely that they’re still around, that’s why — especially considering that the Megalodon preyed on whales, which need to stay close enough to the water’s surface to breathe every once in a while. Sure, some sperm and beaked whales are capable of diving pretty far down, but given that Megalodons preferred warmer temperatures and the fact that the ocean gets colder the farther away you move from where the sun’s light hits the water, why would they be down that deep anyway?

This is all speculation on my part, mind you — I’m not a real scientist and I’m totally not afraid to admit it because my name isn’t Collin Drake and I wasn’t hired by the Discovery Channel to tell you about Megalodons. And this also isn’t to say, of course, that I don’t wish we would find some evidence of a Megalodon still swimming around and tearing it up. But the truth is that there’s currently nothing to suggest that they didn’t all die out 2 million years ago. Until we find something concrete that wasn’t photoshopped into existence by an overworked film editor, we have to operate under the assumption that they’re all gone. That’s kind of how science works: with observable facts and stuff.

Or, you know, you could just take everything in the Discovery channel program at face value and buy into the existence of a modern Megalodon wholeheartedly. That works for some people too, I guess.