Why Do We Accept Villainy From Real-Life Humans That We Don’t Accept From Pop Culture? 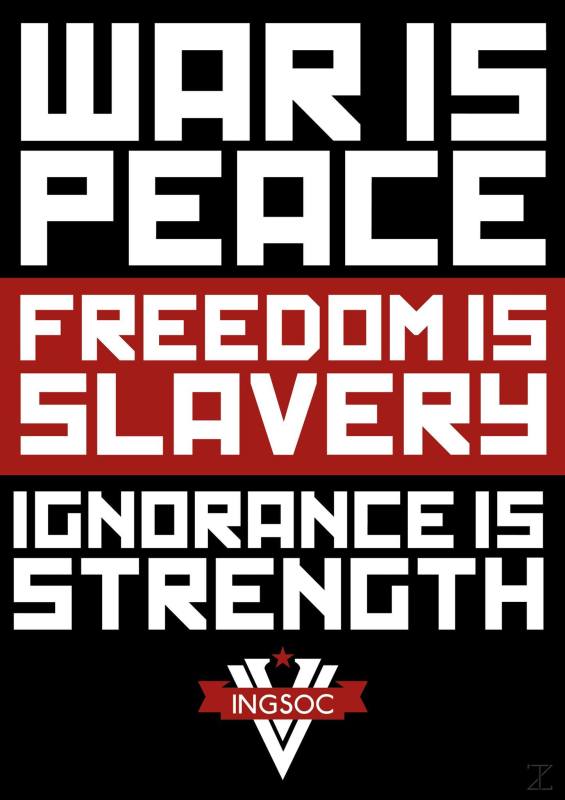 Stories in pop culture rely on recognizable villains for the hero to fight against (and the audience to rally against). These villains are recognizable, because they often mirror actual criminals, corrupt politicians, and other ne’er do wells that we deal with in real life. Sometimes the politics is explicit, other times stories can be interpreted as allegories by any side in a political argument. Either way, pop culture is never completely divorced from politics. So, why is it that we can easily call a villain a villain in a pop culture story, but when we see the same behavior exhibited in real life, we’ll find a way to make excuses for it?

Let’s take Star Wars, a franchise that its creator, George Lucas, credited to his feelings about the Vietnam war and his concerns about an increasingly militarized United States. This piece in Newsweek quotes an interview Lucas did with the Chicago Tribune, where he said, ““[The original Star Wars] was really about the Vietnam War, and that was the period where Nixon was trying to run for a [second] term, which got me to thinking historically about how do democracies get turned into dictatorships? Because the democracies aren’t overthrown; they’re given away.” 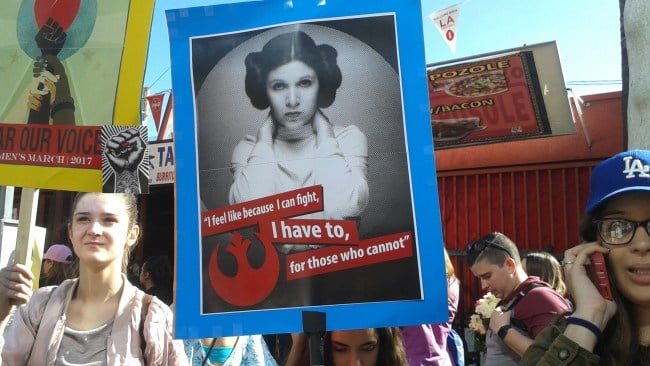 From the Women’s March in Los Angeles.

So essentially, the original Star Wars was about a country (the US) controlling its citizens through patriotic propaganda, coercion, and the removal of civil liberties in order to pursue its interests through war, and the Rebels (anti-war and civil rights activists) fighting against their own government. Star Wars was also a grand and entertaining space opera. It was both of those things.

So, it boggles the mind when Disney CEO (and Disney steward of the Star Wars franchise) Bob Iger says things like “[Rogue One] is a film that the world should enjoy. It is not a film that is, in any way, a political film. There are no political statements in it, at all.” And the denial of any political message in Rogue One is all the more disheartening after he lambasts Bernie Sanders’ criticism about Disney employees not all making a living wage, and then joins a Trump-appointed, “nonpartisan, 16-person forum” designed to protect corporate interests.

Regardless of whether Lucas has been explicit about the political implications of Star Wars (though, for the record, he has), the fact is that no one would mistake Emperor Palpatine for a Good Guy or the Empire as a government they’d want to live under. Okay, some would argue that, mistaking the “absence of tension” for the “presence of justice.” But generally, people get that the Empire is an oppressive regime, and that Palpatine, Darth Vader, Kylo Ren, and anyone else in service of the Empire or the First Order are the villains of the piece.

Yet Trump supporters who claim they love Star Wars can have so much cognitive dissonance going on that they can hear things like “Alternative Facts,” see spectacles like Sean Spicer’s outright lying when it comes to Trump’s inauguration numbers, and watch the slow erosion of the freedom of the press, and still be totally cool with supporting that guy. And I didn’t even touch the blatant racism, sexism, classism, and homophobia of which Trump and his administration have been guilty. You’d think clamping down on our collective freedom of expression would be enough, but it’s not.

Now, Star Wars might be a bit too complex a lens through which to talk about this, because there is a lot of nuance in the Star Wars universe, and depending on which aspect of it you’re talking about, you could theoretically make it be about whatever you want. But check out this clip above, which we’ve covered previously.

No one thinks Bane is the hero of Batman stories. No one watches The Dark Knight Rises and thinks Hey, they should let that Bane guy be in charge for a while. I’m sure he totally has Gotham’s best interests at heart. No! They see him for the unstable villain he is, see through his clear manipulation, and root for Batman to take him down.

Yet when Trump uses Bane’s words and evokes the same feelings…yay? What a strong leader?

And then there’s this. The most simple, yet effective comparison between Trump and a fictional, pop culture villain. This video juxtaposing Trump and B.P. Richfield. Richfield is the corporate boss on the awesome, if really weird 1990s sitcom, Dinosaurs. Richfield is a complete villain with zero redeeming qualities. He has no qualms about throwing his employees under the bus for the sake of a buck. He is sexist, racist (against dinosaurs who walk on four legs and come from the other side of the swamp), could care less about the environment, and when he runs for office, he runs on a platform of fear and misinformation.

B.P. Richfield is clearly framed as the villain of Dinosaurs. And yet there are Americans out there who voted a man into the Presidency about whom a video like this can be made. Like, you shouldn’t be able to make as in-depth a video as this, that perfectly juxtaposes our current President and a literal puppet villain. And yet here it is.

What I don’t understand is the huge disconnect between what people will assuredly call “villainy” in a story and what they’re willing to accept in real life. Like, I’d understand if you looked at a character like B.P. Richfield, and were willing to say Yeah, he has the right idea! before going out to vote for Trump. That would at least make sense. But I know Trump voters who would totally condemn the behavior of characters like Richfield, and Bane, and Emperor Palpatine while simultaneously being okay with the freedoms and protections Trump has out and out talked about taking away, because they prioritize those things less than they do the perceived success he’ll have at “creating jobs,” or whatever, because he’s somehow convinced them that he has the interests of blue collar workers at heart. (PS – he doesn’t. He just says he does.)

I’d like to think that, for many of those Trump voters, it’s a matter of not wanting to see the same villainy in a real person as they would in a fictional character. He doesn’t ACTUALLY believe the things he says. (But clearly he’s peddling in saying those things. Isn’t that enough to disgust you?) It’s a naiveté that’s sweet, but harmful to the country.

However, it’s equally likely that too many of those who voted for Trump have absolutely zero problem with the Empire, Bane, Richfield, or Trump. They see themselves as the minions of those villains; on their side, and so more likely to benefit from the regime than those who are not. It’s frightening.

But this is why it’s so important to embrace the political in the the things we watch, read, and listen to. I was talking to a friend this weekend about how sad it is that my favorite books in high school, George Orwell’s 1984 and Margaret Atwood’s The Handmaid’s Tale, are basically How-To guides now. We need to study the villains in our pop culture to remember what to look out for and what villainy looks like.

It’s one thing to read dystopias like The Hunger Games, or fantasy series like the Harry Potter books and say That was fun! and also Down with the Capitol! or Down with Voldemort! It’s another thing to allow the messages of those books and films to sink in. We should be translating those feelings about the villains in our stories into action against the villains in our real life. We should be using these stories to illustrate to those who don’t see how harmful the person they voted for actually is that the person they voted for is using plays straight out of the villain playbook.

We need to stop pretending that pop culture has nothing to do with politics, and recognize that good stories can often make excellent blueprints.