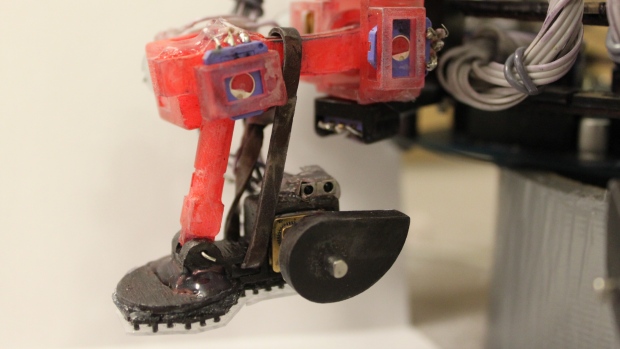 If there’s one thing we can agree about regarding space, it’s that it doesn’t have enough robots in it yet. Scientists at Simon Frasier University in Canada feel this way as well, so they’re working on a bot that can climb walls vertically to aid human astronauts on space missions. Let’s just hope it never achieves sentience and begins to resent us.

The dry adhesive technology that the robot uses to climb was partially inspired by the nanoscopic hairs on the feet of the gecko lizard, using “footpad terminators” that were developed by SFU engineering scientist Carl Menon. With six legs and a square frame, though, “Abigaile” looks more like a spider than anything else to us. That’s great, because as we all know, spiders are not terrifying to look at most of the time. Wait, they are? Well, crap.

At least it moves pretty slowly so we could all get away from it if we needed to do so. And it’s thankfully much less freaky than the Doctor Octopus legs on the robonaut, that’s for sure.

Abigaile was recently tested in space-like conditions by the European Space Agency, who’ve been co-sponsoring this project since 2008. It’s only a matter of time before it’s up . In the meantime, why don’t we all take a page from Japan’s book and build adorable Astro-boy themed robots that answer our questions politely and don’t look like they will murder us at any second?