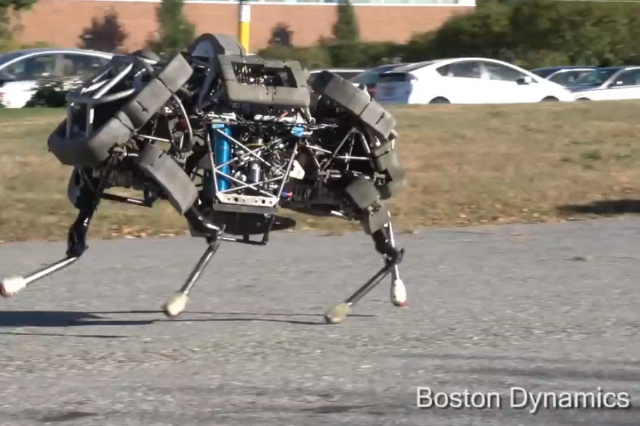 Not content with owning you and everything you do (probably), Google has purchased Boston Dynamics; you know, the engineering company famous for making terrifying robots that will likely bring about the Skynet-pocalypse.

Based in Waltham, Massachusetts, Boston Dynamics has been contracted by the Pentagon and DARPA to develop “research robots” (lol k), and is well-known around the globe for creating machines able to move in ways both insanely fast and incredibly life-like.

Let’s re-introduce you to PETMAN, who is not any less scary when set to “Eye of the Tiger”:

Andy Rubin, head of Google’s robotics unit, has helped the corporation purchase eight robotics companies in the last six months – but is remaining silent about the true purpose behind the internet giant’s acquisitions.

Sure, it’s probably just to fly people their online orders via drone or something; but, hi, have you seen the Boston Dynamics robot that can literally run faster than Usain Bolt?

That, except with the Google Chrome logo for eyes.