Today in the Steam Summer Sale 7/20 | The Mary Sue

Today in the Steam Summer Sale: More Games That Are Cheaper Than Usual 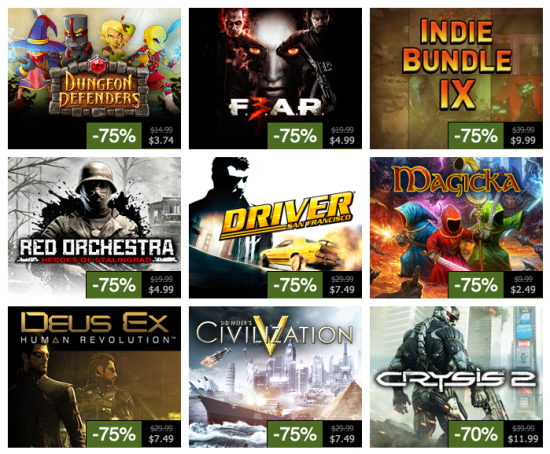 Just in case you aren’t planning on seeing The Dark Knight Rises tonight, you can spend more money on games that will sit in your library for months. Today was quite a day for the 2012 Steam Summer Sale. Every game featured in the daily deals had its price cut by at least 70%. On top of that, there is only one game that breaks the $10 mark. Here we have a few shooters, a strategy game to spend years on, and a nice little indie bundle bow to top it off.

The first thing that caught my eye when I opened up Steam’s homepage was 75% off Deus Ex: Human Revolution, which is a great pick for shooter fans and RPG fans alike. We got a lot of shooters today with Crysis 2, Red Orchestra, and F.E.A.R. 3 on top of Deus Ex. This might be a good time to take a look at the F.E.A.R. series if you haven’t already; you can find all 3 games and 3 DLC packs for $13.50. We also have a pair of 4-player co-op indie action RPGs in Dungeon Defenders and Magicka. You’ll get two really good games for a good price if you’re looking to give co-op RPGs a try. You’ll also find Driver San Francisco for a good price if you’re into a game where you do a variety of things usually involving driving. Then you have Civilization V. I recommend this game if you are under house arrest or if you just have a lot of time to kill. Either way, really. You could buy Civ V for $7.49 and squander the rest of your youth with “just one more turn,” or you could buy the Civilization Collection which includes Civ III, IV, and V and all their expansion packs, for only $24.99. That’s 82% off. As for Indie Bundle IX, we have some pretty cool games in Capsized, Jamestown, Revenge of the Titans, VVVVVV, and Zeno Clash. While I’m not quite sure about most of those games, I can tell you that you’ll probably like VVVVVV and Zeno Clash. They are well worth the $9.99 for the pack.

For all those looking to snatch games at the last moment like Indiana Jones’ hat from under a closing door, we’ll remind you to check back with Steam on July 22, as the best deals will be offered on the last day. That is, of course, if history repeats itself.