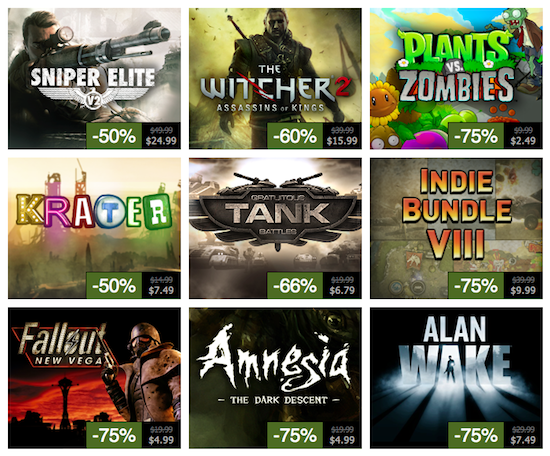 How exhausted are you from buying things you aren’t going to play for a while? Well, load up on those carbs, because you still have a few more days of the 2012 Steam Summer Sale left. Today, we have another decent indie bundle, a legitimately scary game, some casual-but-secretly-deep goodness, and a game where you might legitimately die in its tutorial.

This time around, the games are actually pretty diverse, with only two military games that also happen to be quite dissimilar from one another, Gratuitous Tank Battles and Sniper Elite V2. PopCap’s opus and somewhat casual, somewhat deep tower defense game, Plants vs. Zombies, makes an appearance, as does legitimately scary game Amnesia: The Dark Descent, and a game featuring a writer writing about writing while stuck in some writing, Alan Wake. Rounding out the group, we have one of the more hardcore PC gamers’ favorites, The Witcher 2: Assassins of Kings, along with Krater, and Fallout: New Vegas. The next indie bundle, Steam’s Indie Bundle VIII, is also worth some sort of investment, as it includes Demolition Inc., HOARD, SOL:Exodus, Swords and Soliders HD, and Wings of Prey, with at least HOARD, Swords and Soliders HD, and Demolition Inc. having widespread preexisting cred.

If you have forgotten for some reason even after we’ve been reaming it home, the prices of games tend to significantly drop during the last day of the sale, which is July 22, so make sure your eyes are peeled and your pockets still have some sort of currency left in them.