Today in the Steam Summer Sale: A Bunch of Games You Want 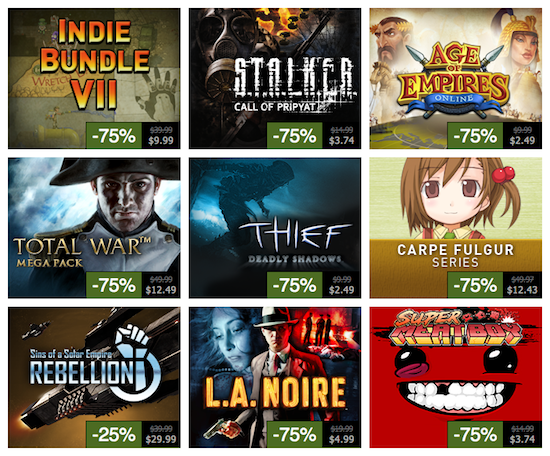 Do you have any money left? Funny how a bunch of extremely cheap games end up costing you more than a few expensive ones. Today in the 2012 Steam Summer Sale, we have a pretty good batch of games that finally aren’t a bunch of war games, and another worthwhile indie bundle is also on offer.

For fans of open-world shooters sporting enormous acronyms, we have the sequel S.T.A.L.K.E.R.: Call of Pripyat, which was mildly difficult to type. In the strategy gaming circuit, Age of Empires: Online and Total War Mega Pack has been made available for relative chump change, while Sins of a Solar Empire: Rebellion has only dropped ten bucks to a $29.99 price tag. For those training to become a master interrogator that still has to shoot bad guys at the end, L.A. Noire has fallen all the way to $4.99, and you’d practically be stealing Thief: Deadly Shadows for only $2.49. The cutesy anime-a-thon Carpe Fulgur pack inclides Chantelise: A Tale of Two Sisters, Fortune Summoners, and Recettear: An Item Shop’s Tale for the price of $12.43, while the disturbingly adorable Super Meat Boy will throw you into a platforming rage for only $3.74. Steam’s Indie Bundle VII is also rearing it’s head, and for $9.99, you can nab Avadon: The Black Fortress, Dungeons of Dredmor, Q.U.B.E., which was less difficult to type than a certain other acronym, the liquid puzzler Vessel, and Zombie Driver.

As usual, this is your reminder that if you want to save money and are a daring, heroic risk-taker, you should wait until the last day of the sale, July 22, as a historically, a lot of the games will drop in price even more. None of that is officially guaranteed, so if you really want a game and are afraid it won’t be put up for a new discount at the end of the sale, you should probably act now.