The Steam Summer Sale is Finally Here | The Mary Sue 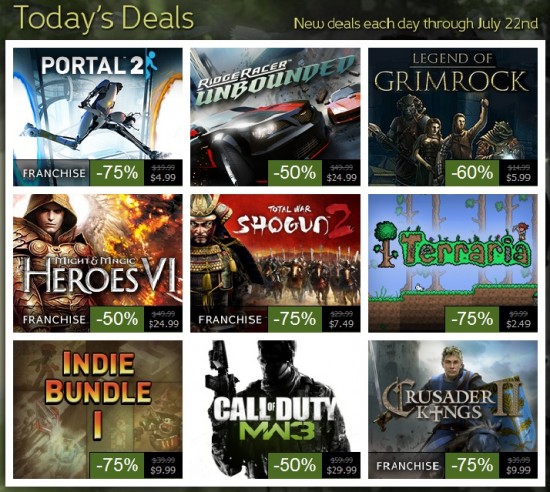 Even if you’re like me and have a love-hate relationship with Steam because it won’t let you log into the website with the same username and password that logs you into the client, the frustration is usually worth it when it comes to Steam sales, like their annual summer sale. Guess what? The 2012 Steam Summer Sale is finally here, starting today, and runs through July 22 with various daily deals and bundles for your perusal.

The first day of the sale is a little underwhelming, with the best deal being Portal 2 for only $4.99, but if you have Steam — or play video games in general — you’ve probably already played it. The next best deal seems to be the sidescrolling Minecraft-alike Terraria for just $2.49, though it was only cut back from $9.99. Other than that, you have your standard shooter franchise, your standard swords-and-armor affair, and an indie bundle that contains some games you’ve probably already picked up from various other indie bundles that always seem to be available every other week. This one contains Anomaly: Warzone Earth, Cave Story+, EDGE, Lone Survivor, and The Baconing, for a bundled price of $9.99.

Aside from the daily deals (that you should check back on every day to see if any of the new ones tickle your gaming fancy), the Summer Sale also offers some impressive bundled deals, such as a Telltale Games collection for only $49.99 that includes Back to the Future: The Game, Jurassic Park: The Game, Puzzle Agent and its sequel, the complete Tales of Monkey Island collection, and The Walking Dead. For variety’s sake, the Activision bundle includes Blur, Call of Duty, Call of Duty 2, and Call of Duty: United Offensive, GUN, Prototype, Singularity, TimeShift, Transformers: War for Cybertron, and Vampire: The Masquerade – Bloodlines.

If you’re eyeing a game that isn’t part of the daily deals, a popular money-saving strategy consists of waiting until the last day of the sale, because traditionally, the prices tend drop even further then. Head on over to the Steam store and exercise your waiting-until-the-last-day power.