Linux and Valve Celebrate Valentine’s Day Together, Steam for Linux is Live 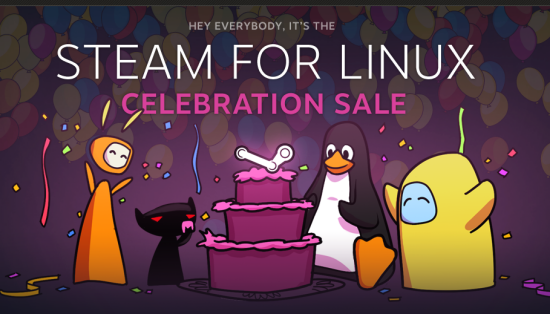 Hey, Linux users, Valve heard you love games, so they released the official version of Steam for Linux today. To make the deal even sweeter, they’re also offering 50 Linux compatible games at 50 to 75 percent off the regular price. Looks like you might have to cancel that Valentine’s date tonight. You’ve got games to play.

Valve has had a beta version out for Linux since November, which they opened up to everyone a few weeks after launching it, but Steam for Linux is out of beta and into the real world today. Canonical’s director of consumer applications, David Pitkin, said “The introduction of Steam to Ubuntu demonstrates growing demand for open systems from gamers and game developers.”

The Steam for Linux Celebration Sale is a great way to kick off the release, offering Linux users the chance to pick up a bunch of games on the cheap to be able to really dive into the Steam on Linux experience. The games being offered at a discount include Counter-Strike, Half Life, and World of Goo. In addition to that, Linux users who download Team Fortress 2 also get an in-game version of the Linux mascot Tux for their character to carry around.

You can download Steam for Linux in the Ubuntu Software Center, and see the full list of discounted games on the Steam site announcing the sale. Not to rush you, but the sale ends on February 28th.

(Steam via Polygon, image via Steam)