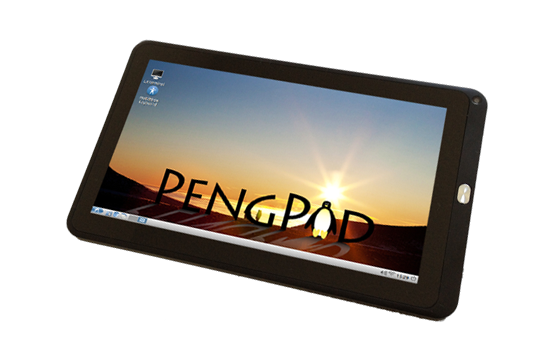 Thanks to another crowdfunding victory, the PengPod, a $100 tablet capable of dual booting Android and a full desktop version of Linux, is becoming reality. The PengPod is expected to start shipping to IndieGoGo contributors next month. Anyone else who wants to get their hands on one will have to wait, but the kind of audience that would want a $100 Linux tablet is probably made up of people who would kick in $100 to an IndieGoGo project to make one happen. I only wish I had heard about this sooner.

The crowdfunding campaign actually reached its goal of $49,000 a few days before its December 2nd deadline. By the time the campaign ended it had exceeded it’s goal and raised a total of $72,707. That buys a lot of $100 tablets.

The PengPod comes in two versions, the PengPod 700 and the PengPod 1000, which come with a seven and ten inch screens respectively. They each have 1GB RAM and 8GB flash memory, but the ten inch version comes with an additional USB port and a larger, presumably longer-lasting battery.

There is also an ultra-portable PC as part of the project. The PengStick is a 3.5 inch stick PC along the lines of the Raspberry Pi, offered as a reward for contributors coming in at the $85 level.

There are some cost associated with the crowd funding that will go away long term but our orders will not be as large. Also our labor cost for shipping and QC stays low because we can plan and do a lot at once.

So in short, I dont know. We are going to have to analyze at that point. If you want one, I would go ahead and contribute now.

So it looks like the final price is still a bit up in the air, but it will have to stay low to keep this an appealing option in an increasingly crowded tablet market like the Kindle Fire and the iPad Mini.