Ubuntu Phone Will Have Default Terminal App | The Mary Sue

Ubuntu Phone Will Come Complete With a Terminal App, If You’re Into That Sort of Thing 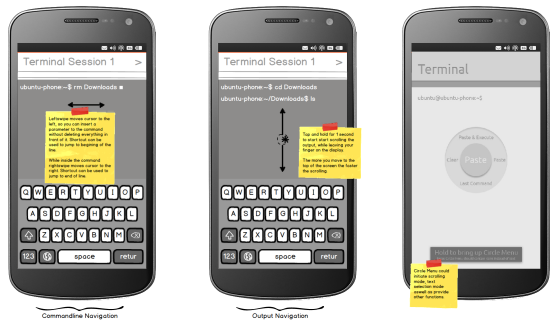 When the ticking clock on Ubuntu’s website hit zero and revealed the Ubuntu Phone platform, I got excited. I’ve used various versions of Ubuntu off and on over the years, and recently started using it as the primary OS on my laptop. I’ve been impressed and would love to see Ubuntu flow over on to my phone as well. The Ubuntu Phone experience will be even more similar to the desktop version than previously thought, because Ubuntu Phone will have a terminal application, giving users complete control over their phone’s system.

The terminal isn’t the kind of thing casual users will get a lot of use out of, and that’s true of the terminal in the desktop version of Ubuntu as well. I’m not an experienced or particularly skilled Linux user, but the times I’ve needed to do anything in the terminal I’ve been glad it’s there, and I’ve gotten a lot of mileage out of the few terminal commands I do know. Instead of digging through menus or utilities, with a few lines in the terminal you can do just about anything in Linux.

The Android operating system is based on Linux as well, and although it doesn’t include a terminal application by default, there are a number of third-party terminals available. By including their terminal in the Ubuntu Phone platform it looks like Canonical is serious when they said they want to bring the full Ubuntu experience to mobile devices.

Further blending the line between phone and desktop, by docking an Ubuntu Phone powered device with a monitor, mouse, and keyboard, it can run as a full PC.

(via Ars Technica, image via Ubuntu)