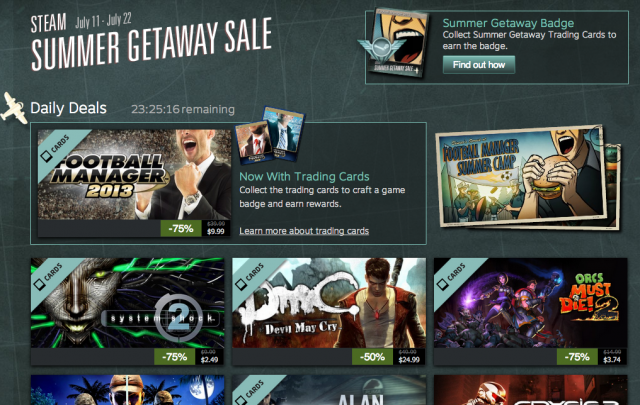 It’s now the sixth day of the Steam Summer Sale — gosh, time sure does fly when you’re spending all your hard-earned money on ridiculously inexpensive video games! Here are today’s Daily Deals, as well as our top recommendations so you don’t end up handing over all your money at once. You know, unless you want to do that.

Sleeping Dogs for under $7 dollars is a pretty solid grab, and Mark of the Ninja for under $4 is basically a steal. So is the Alan Wake bundle, which is going for under $2.99. If you had to stick to just one game, though, we’d say to go for Mark of the Ninja. It’s definitely the best bang for your buck.

Also, if the trading cards are a thing you care about, keep in mind that Rising Storm and the Crysis franchise are the only two games in this deal rotation that don’t come with any. Don’t let that stop you if you’ve had you had your heart set on getting either of them, of course.