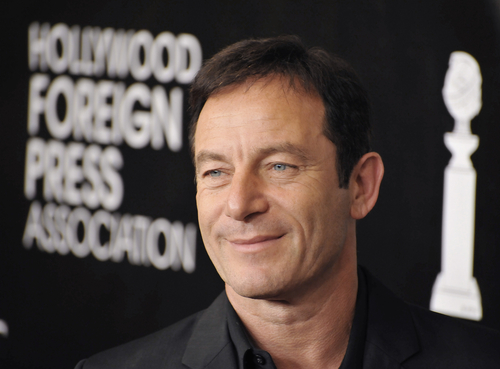 It all started with an errant tweet. Jason Isaacs tweeted some important Star Trek: Discovery news that he probably shouldn’t have.

He deleted the tweet which means he probably wasn’t supposed to announce yet but WHOOPS pic.twitter.com/FvQRL8QwhS

According to The Hollywood Reporter, Isaacs has been cast “as Captain Lorca, the captain of the Starship Discovery.” He joins an increasingly exciting cast that, of course, includes The Walking Dead‘s Sonequa Martin-Green as Rainsford, a lieutenant commander and the series’ protagonist.

Other members of the cast include: Doug Jones and Anthony Rapp as science officer Saru and Stamets, respectively; James Frain as Sarek, a Vulcan astrophysicist and Spock’s father; Terry Serpico as Starfleet admiral Anderson; Maulik Pancholy as chief medical officer Nambue; and Sam Vartholomeos as junior Starfleet officer Connor. Recurring actors include: Michelle Yeoh as Georgiu, captain of another ship called the Shenzhou; Shazad Latif as Kol, a Klingon commanding officer; Chris Obi as a Klingon leader T’Kuvma; and Mary Chieffo as L’Rell, a Klingon commander.

I’m a big fan of Isaacs’ work, and he’s a great actor, so this is definitely good news. However, 1) He’s generally known for playing villains, or people with shady secrets/pasts/etc. Is this Isaacs finally getting cast as a “good guy,” or is this indicative that this particular Starfleet captain isn’t on the up and up? And 2) I’m a bit disappointed that we’re back to the white, male starship captain after having only one respite in Kate Mulgrew’s Captain Janeway. (Of course, we had Benjamin Sisko commanding Deep Space Nine, but we have yet to have a woman or a person of color commanding a ship at the forefront of a Star Trek series or film.)

Then again, as I said above, Martin-Green’s Rainsford is billed as the show’s “lead,” which makes me even happier than a fictional title. The fact that a lieutenant commander is the show’s lead also potentially points to conflict with an antagonist captain. We’ll see! Also exciting is that there is an Asian female captain on a ship called the Shenzhou. Can’t wait to see how Michelle Yeoh fits into all this.

Unfortunately, we’re not yet sure how long we’ll have to wait for Star Trek: Discovery, as the premiere date has been pushed back several times, and now we have no information more clear than “late summer or fall.”