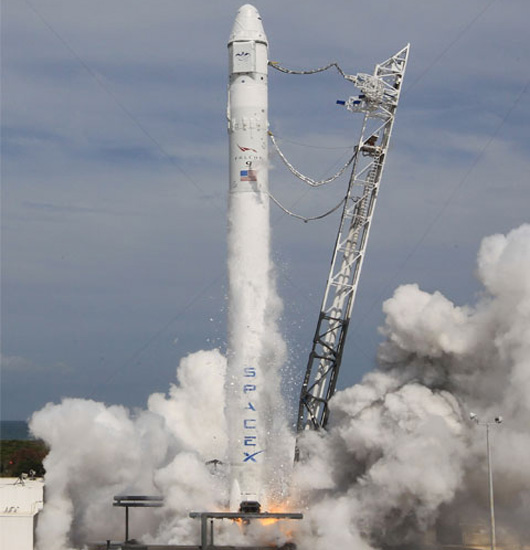 It’s been nearly a year in the making, but SpaceX’s historic mission to the International Space Station is on track to begin tomorrow with the blast off of its Dragon spacecraft. The unmanned mission will be a historic first for the company, and will no doubt become a touchstone as we enter the age of commercial space flight. Also, there will be an awesome rocket launch.

Yesterday, SpaceX founder and PayPal creator Elon Musk tweeted that the company has just passed NASA’s final launch review adding, “All systems go for liftoff on Sat morn.” Barring any last minute hiccups, SpaceX’s Falcon 9 rocket is scheduled to blast off from the Kennedy Space Center at Cape Canaveral, FL  at 4:55 AM EDT Saturday morning. Should something go wrong, the next flight opportunity would be on May 22.

The mission will be the second flight of SpaceX’s Dragon spacecraft, which has been packed with 1,200 pounds of food, clothing, and some experiments designed by school children. While the ISS crew will no doubt appreciate the cargo, the mission’s real goal is to demonstrate that the Dragon can coordinate, communicate, and safely dock with the space station. Once at the orbiting outpost, this will mark the first time a spacecraft from a non-governmental organization has berthed with the station.

In addition to that milestone, the mission will also kick-off the first of a dozen resupply missions NASA has contracted SpaceX to perform under its Commercial Orbital Transportation Services plan (or COTS). The contract is reported to have cost NASA around $1.6 billion.

Once in orbit, it will take three days for the Dragon to reach the ISS, and two more days of pre-docking maneuvers to ensure everything is in order before finally meeting the ISS on the fifth day of the mission. After nine days at the station, the ISS crew will load the Dragon with return cargo which will be recovered after the spacecraft splashes down in the Pacific ocean.

We’ll be bringing you coverage of the launch as it happens, so tune in early tomorrow!