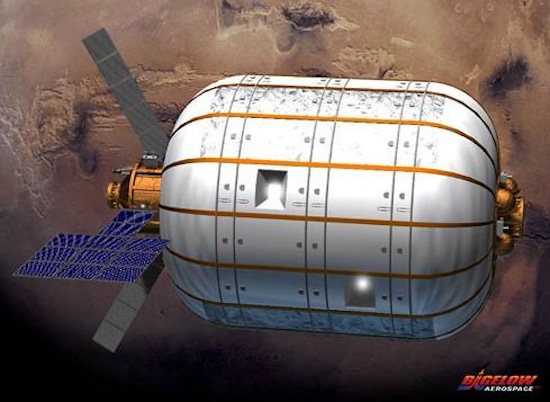 A little over a week before SpaceX’s planned unmanned mission to the International Space Station, the company has announced a new partnership with Bigelow Aerospace, makers of inflatable habitats for space. Though the deal may sound far-fetched, its a sign that the commercial space industry is maturing quickly an has an eye on the future.

The deal was announced yesterday in a SpaceX press release, where the two companies said that they would begin a worldwide joint marketing campaign. While “inflatable space station” sounds like a completely bonkers idea, it was actually developed by NASA and acquired by Bigelow in the 1990s. According to their website, their inflatable habitats offer as much protection against high-velocity impacts and radiation as traditional solid aliminum design, while offering more space at a fraction of the weight. And of course, when launching into space, weight is everything.

The end goal of the this agreement is no doubt to increase the customer base for the two companies. SpaceX has done extremely well in competitions for NASA contracts, but running a company with a single client isn’t good business — even if that client is the U.S. government. SpaceX needs to be able to convince more governments, companies, and researcher establishments to buy space in their spacecraft.

However, the International Space Station is currently the only manned outpost in space, and is the only location for long-term microgravity experiments. By partnering with Bigelow aerospace, SpaceX will be able to offer potential clients the complete package. Using Falcon 9 rockets and Dragon spacecraft, SpaceX will get your project into space for cheap and Bigelow will house it in their inflatable BA330 space stations.

The company’s founder Robert T. Bigelow said as much in yesterday’s press release:

“We’re very excited to be working with our colleagues at SpaceX to present the unique services that our two companies can offer to international clientele. We’re eager to join them overseas to discuss the substantial benefits that BA 330 leasing can offer in combination with SpaceX transportation capabilities”.

SpaceX isn’t alone in their search for clients beyond NASA. Boeing, for instance, worked out an agreement with Bigelow for their CST-100 spacecraft. Interestingly, Boeing said that it would not develop the craft unless targets besides the ISS could be found, hence their partnership with Bigelow.

According to their press release, SpaceX says that they will kickoff their marketing campaign in Japan. The move is no doubt a carefully considered one; Japan has an active space program, and no doubt has customers interested in getting their experiments into space but either cannot afford time on the ISS or is unwilling to wait for space to be made available on the station.

Like SpaceX, Bigelow is one of the few space companies with a proven track record, with successful launches and deployments of their inflatable habitats in 2006 and 2007. However, the company has struggled to push forward as the number of ways to get humans to space has remained extremely limited. Bigelow has some history with SpaceX as well; in 2009 Bigelow booked an undisclosed Falcon 9 rocket launch for some time in 2014.

While most people are interested in commercial space projects as a means for everyday folks to slip the surly bonds of Earth, tourism is not going to power the future of space travel. For the time being, it’s going to be corporations and research that will be the primary clients of companies like SpaceX. Though the cost of getting to space is dropping fast, it’s still an expensive and dangerous endeavor. However, the success of projects like the Bigelow/SpaceX venture will pave the way to the future of fast and easy space travel.