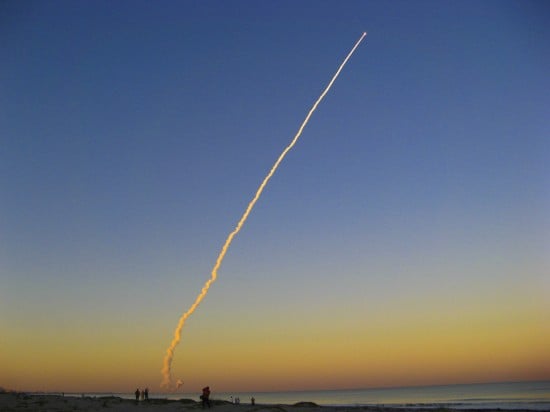 If the idea of having some of your cremated remains blasted into space is appealing, you might want to consider moving to Virginia. The state’s legislature is reportedly considering a bill that would provide a hefty income tax deduction for people who opt for a space burial, perhaps turning the state into America’s premiere repository for the space-bound dead.

The impetuous behind the legislation has less to do with following in the footsteps of Gene Roddenberry and more with trying to bolster use of the Mid-Atlantic Regional Spaceport, located on Wallops Island, Virginia. With the roll-up of the Space Shuttle program, the spaceport is looking for areas to expand into and has apparently hit upon the idea of space burials. If passed, the legislation would provide a $2,500 per year income tax deduction, but not exceeding $8,000, for those that opt for a space burial.

During a space burial, a small sample of cremated remains are sent into space aboard a rocket. Generally, a single rocket carries the remains of several people to orbit and sometimes re-enters the Earth’s atmosphere after orbiting for a few days. However, Dr. Eugene Shoemaker carries the distinction of being the only person buried off-world, a sample of his remains having been carried to the moon aboard the Lunar Prospector probe in 1999. To date, the remains of only 150 people have been sent into space.

Of course, simply being offered a sack of cash might not be enough to get people onboard with the concept. As funerary arrangements go, space burials are pretty expensive, and don’t dispose of the entirety of the deceased. Those aiming to have their corpses placed in a photon torpedo like Spock will still have to wait.

(LA Times via Slashdot, Wikipedia, picture of a rocket launch via VTHokiEE06)