The Three SOTU Guests We're Excited For | The Mary Sue

Move Over, Obama — Who We’re Really Excited To See at the State of the Union 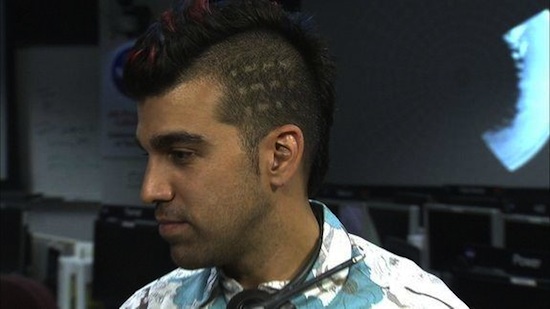 Between a still flagging economy, gun violence that seems more and more out of control, and hostile foreign powers edging closer to becoming nuclear threats, President Obama has a lot of ground to cover in his State of the Union address later this evening. But it’s not like he’s going to be the only important person on hand, and we’re going to be on the lookout for a couple of celebrity guests in particular at tonight’s State of the Union, including NASA’s own Mohawk Guy.

Bobak Ferdowsi — You may know him by his more popular nickname, Mohawk Guy, but Curiosity flight director Bobak Ferdowsi will be taking a night off from NASA to be a guest of First Lady Michelle Obama at the State of the Union address. That’s almost as cool as the activity that brought Ferdowsi into the public eye — using a sky crane to land a robot on Mars. Ok, actually it’s not that cool, because NOTHING is that cool, but sitting with Michelle Obama at any event would be high on our list of Things To Do That Are Amazing. Plus, it’s really nice to see a NASA nerd get an extended moment in the sun, even if it did take a gimmicky haircut to get him there. We’ll take what we can get.

Tim Cook — Another guest of Michelle Obama’s will be Apple CEO Tim Cook. Could not being the center of attention for once find Cook with his guard down? Will he be so caught up in the heat of the moment and the excitement of learning just what the state of the union is that he’ll let slip some key detail on an upcoming tech toy from Apple, like the Apple watch we’ve seen making the rounds of the rumor mill this week? Almost certainly not, but hey, a person can dream, right?

Ted Nugent — Ted Nugent will be on hand tonight as the guest of Congressman Steve Stockman (R-TX) and, as he delicately phrased it, to “take on the media orgy” that follows the event, and is pretty much the main reason we here at Geekosystem are so upset at being snubbed for a press invite. Also: mini-quiches. That said, this should be a hoot. Ted Nugent saying he’s intent on causing a scene is like Godzilla announcing he’s hell bent on destroying a city. The dude does a good enough job of it when he’s not thinking about it that we just know we won’t be able to look away, no matter what carnage ensues when he decides to actually try and get some attention. It’s going to be like watching a bull in some kind of shop. China, probably. Also, the bull has double AK-47s for horns, because the bull is actually The Nuge. How loud will he be shouting about the Second Amendment at reporters and probably also the families of gun violence victims, many of whom have been invited by the President? Our guess is very, because the former Damn Yankees frontman doesn’t have a reputation for subtlety. We’ll just have to watch to find out.