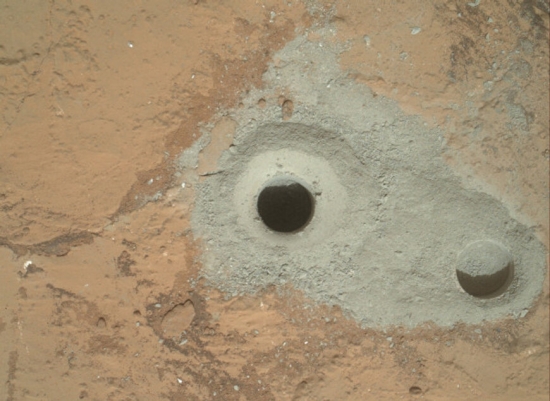 After celebrating their six month anniversary earlier this week, the Curiosity rover has finally consummated its relationship with the planet Mars by drilling its first hole into the rocky surface. Curiosity and Mars have been fooling around for a while now, with the rover analyzing samples and sending photos of the planet’s mounds and craters to all its friends, but the two finally went all the way this weekend. Curiosity’s next step is to further probe the hole to search for evidence of a once wet environment.

The initial drilling only resulted in a hole 0.63 inches wide and 2.5 inches deep, but that’s nothing to be ashamed of. The first time is always awkward, and I’m sure Curiosity will do better next time. This is not only Curiosity’s first time drilling Mars, but it’s also the first time any robot has drilled into the planet’s virgin rock.

It’s important to make sure your rover knows all the risks and consequences of drilling before it’s out there on its own, so to make sure Curiosity was prepared and safe on the big day, scientists and engineers at NASA’s Jet Propulsion Laboratory ran extensive practice drills here on Earth. Chief engineer for Curiosity’s sample system, Louise Jandura said:

Building a tool to interact forcefully with unpredictable rocks on Mars required an ambitious development and testing program. To get to the point of making this hole in a rock on Mars, we made eight drills and bored more than 1,200 holes in 20 types of rock on Earth.

It looks like all that practice drilling paid off, and the team is excited about what they’ll find from the sample taken from the flat, veiny, Martian rock. The rock powder that was generated and collected by the drill will be carefully analyzed over the next several days. It will be vibrated through a sieve to sort out particles larger than 150 microns, and the remaining particles will pass through to the Chemistry and Mineralogy (CheMin) instrument and the Sample Analysis at Mars (SAM) instrument for further study.

It’s truly a proud day for us all. Curiosity had no qualms about being one to kiss and tell. It tweeted the news yesterday for the world to see.