Around 85% of U.S. Players Quit Social Games After One Day | The Mary Sue

No, I Won’t Visit Your Farm: Around 85% of U.S. Players Quit Social Video Games After One Day 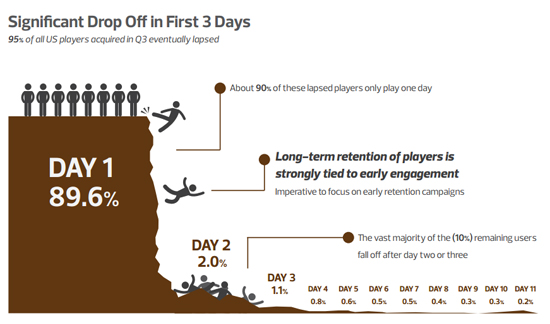 Player churn is a big problem for social video games. Companies like Zynga constantly have to work on their retention rates, because players tend to lose interest and stop playing within a short period of time. Just how long does it take for the majority of users to stop bothering with their digital crops? Well, a study conducted by Playnomics from July 1st to September 30th of this year found that around 85% of their United States players lapsed after just one day.

It’s important to note that this statistic only represents the data Playnomics had on hand, and only during that select period of time. Even so, extrapolated to cover for the entire year, it’s a scary look at just how few people actually stick around in social video games for any length of time. Gamasutra explains:

Beyond those first 24 hours, it proved more difficult for developers to keep players around, as 95 percent of all the users in Playnomics’ study stopped playing their new social games by the end of September. In fact, most users tend to fell off within the first three days – after that, it seems they become far more likely to stick with a new title.

This pretty much confirms that social video games are essentially the bubblegum of the industry. Doesn’t really provide any benefit, and they’re nice to chew on for a while, but any flavor is basically gone soon enough.