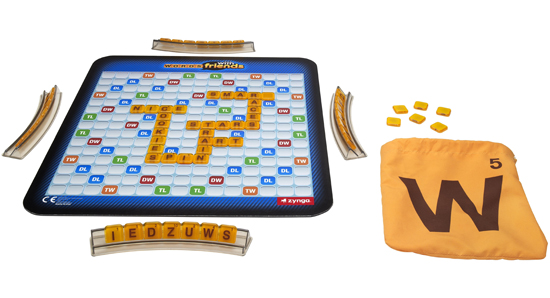 Well, it’s finally happened. The inevitable collaboration between Zynga and Hasbro has produced a line of board games from the latter that are based on properties from the former which are really just clones of the properties of the latter. We’re through the looking glass here, people. There’s something profoundly amusing about the fact that there’s now going to be a Scrabble board based on Words With Friends.

Not all of the games translate directly, as Zynga has absorbed more than just board game properties, so Farmville has become Hungry Hungry Herd — basically Hungry Hungry Hippos but with microtransactions. We’re kidding, of course. We hope. Others are certainly more direct, like Draw Something essentially becoming Pictionary.

The whole thing does have something of a sinister twist, though. Most of the games will also come with digitally-redeemable currency for Zynga games, meaning that these might become something of a gateway game, if you will, to set the stage for Zynga’s Facebook indoctrination. The more Hungry Hungry Herd someone plays, the more Farmville they might play, which in turn will have them play more Hungry Hungry Herd. It’s a horrifying feedback loop.

Perhaps we’re being too harsh. At the same time, however, it’s hard to imagine what added value the Zynga properties actually bring to the board games beyond the fact that they’re Zynga titles and therefore have an online presence. Then again, maybe someone at Hasbro is getting some sweet Cityville perks out of all this. It’s honestly hard to say.

(Yahoo! via The Verge)