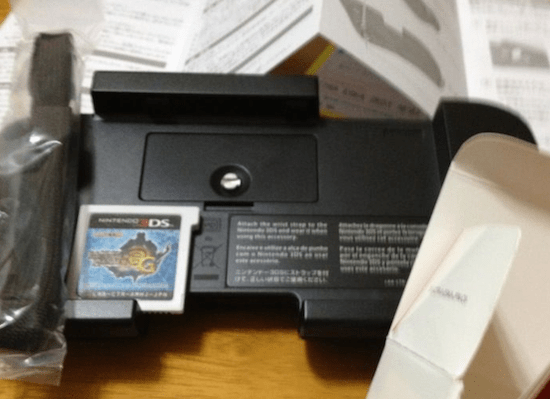 Remember that ridiculous Slide Pad thing Nintendo is releasing for its maligned 3DS handheld? Well, some enterprising soul managed to snag one of the devices early in Japan, where the peripheral went on sale yesterday, and made a startling discovery. Apparently the manual for the device claims that although the Slide Pad runs on a separate AAA battery, it will last some 480 hours before needing to be replaced.

For the unaware, the Slide Pad is a weird little device that Nintendo created to add a second circle pad to the 3DS. Their exact motivations are unclear, though the 3DS was criticized for having only one analog stick. When it was finally revealed, many were taken aback by the size of the peripheral, which adds significant girth to the handheld. It was also announced that the Slide Pad would not draw power from the 3DS, but would instead rely on a separate battery.

The fact that the battery apparently lasts a really, really long time is something of a silver lining to the whole debacle. Though the fact that the peripheral’s single circle pad doesn’t draw a lot of power shouldn’t come as much of a surprise. Oh, and it looks like the battery compartment has as screw-lid, so there’s that.

While that may seem like truly breathtaking battery life, it’s important to note that this figure is reported to come from Nintendo’s own documentation. As is the case with other pieces of consumer electronics, it wouldn’t be too surprising if Nintendo had inflated those claims somewhat. But even if the device only gets 240 hours of battery life in the wild, that’s still 10 straight days of gaming. Speaking personally, I think the most time I ever put into a handheld game was Pokèmon Red — about 96 hours worth. With that in mind, the slidepad will probably get you through just fine.

However, one of the most convenient things about modern Nintendo handhelds has been the ease of recharging them. Nintendo’s sealed, rechargeable battery design has done away with having to root around for spare batteries, or carry a bunch of spares around. Instead you just whip out the adapter and charge it up. By relying on a separate battery, Nintendo is probably keeping things cheap and simple, but is also defeating the convenience of having a well-designed modern handheld.

Those in the US and eager to strap on the Slide Pad will have to wait a little while longer. The peripheral won’t go on sale in the US until February 7, which just so happens to be the proposed launch date for the SpaceX’s mission to the ISS. Coincidence? Absolutely. But at least there will be something fun to do that day.