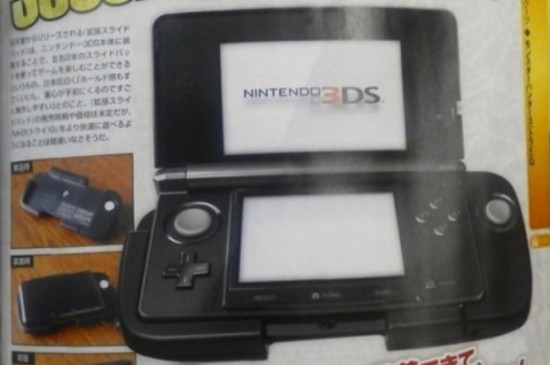 A couple of weeks ago, we reported that there were rumors flying around that Nintendo was prepping the flailing Nintendo 3DS for a radical overhaul in which the company planned to tone down the focus on the machine’s titular 3D capabilities. Along with that almost nonsensical rumor, word got out that Nintendo was planning a secondary circle pad attachment for the 3DS, a rumor almost as ludicrous as toning down the 3D capabilities of a machine that has the sole purpose of displaying in 3D. Where would the secondary circle pad even go? The current placement of buttons on the face of the device would surely make a secondary circle pad attachment exist in an odd location, cramping hands across the world, so that can’t be a thing, right? Turns out it’s a thing. A confirmed thing.

Outed by venerable Japanese gaming magazine Famitsu, the Nintendo “Slide Pad” isn’t some tiny attachment that unobtrusively sticks into the right side of the device, but something akin to one of those extra battery peripheral grip attachments, extending the entire size of the device. As one can see from the above picture, the Slide Pad also seems to be placed in an awkward area, directly to the right of the face buttons, though it probably would not have been any better to have the Slide Pad extend over the side of the device and plant itself in the space between the face buttons and the power button, since it would be raised higher than the rest of the buttons on the unit. Along with the secondary circle pad, the attachment brings along two extra shoulder buttons.

Along with the oddly placed circle pad and the two extra shoulder buttons, the peripheral doesn’t seem to come with much else other than extra bulk and awkward size, though it’d be nice if the rest of the plastic was used to provide some extra battery power, as the 3DS kind of has an aversion toward battery power.

With the Tokyo Game Show — Japan’s version of E3, so to speak — one must wonder if Nintendo is going to reveal the aforementioned rumored 3DS redesign, and if it’ll incorporate the Slide Pad’s additions into the main body of the device.