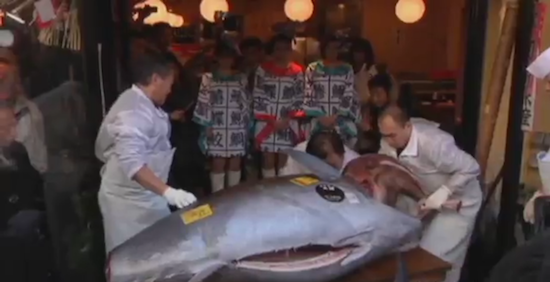 Caught off northeast Japan, the above single tuna weighed 593 pounds and was auctioned off for the ridiculous price of $736,000. The exorbitant price isn’t as ridiculous as it first appears, at least, because the person who bought the fish, owner of a chain of sushi restaurants Kiyoshi Kimura, wanted to give back to the Japanese community after what he felt was a difficult year in 2011, which included the March 11 earthquake that devastated a large part of the country.

Rather than shipping the fish overseas, Kimura wants the fish to be split up and enjoyed throughout Japan, and the fish will create about 10,000 slices of sushi that will be served at regular sushi prices. The sushi chain is set to lose around $600,000 on the purchase, serving the sushi at regular prices even though a piece of bluefin tuna sushi can sometimes fetch up to a $65 price tag.

The buying price of the tuna equates to around $1,238 per pound, not surprisingly setting a record. It’s nice to see someone setting that record in the spirit of their countrymen, especially when that someone could’ve just chopped the thing up and sold it at a profit.

(via The Telegraph, Business Insider)