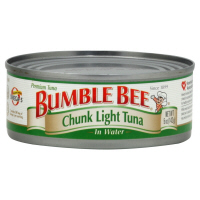 Lee Porrazzo, a man from White Plains, New York who says that he ate 10 cans of tuna a week for two years, is suing tuna canning company Bumble Bee after he was diagnosed with mercury poisoning. Porrazzo ate all that tuna for the protein, and he says he was misled by Bumble Bee commercials advertising their tuna as “heart healthy.”

No one could figure out what was ailing Porrazzo until his doctor ordered a “heavy metals” blood test in October 2008 that revealed a “dangerously high” mercury level of 23 micrograms per liter, more than twice the normal amount, his suit says.

“One day I got a call from the [state] Health Department,” he said. “They said, ‘Normally we don’t contact people, but your levels are so high we had to contact you.’ I was taken aback and I was scared.”

According to the FDA, you can safely eat about 12 ounces of tuna per week; a can of Bumble Bee Chunk Light Tuna contains 5 ounces of tuna, so Porrazzo was consuming more than four times the safe amount every week for two years.