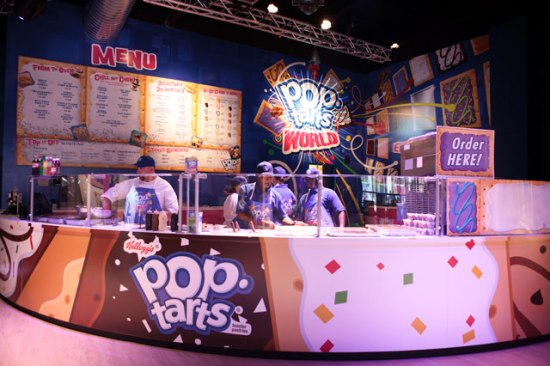 This morning, the world changed. It changed because within it, a smaller, more horrifying world was birthed out of the ooze — a Pop-Tarts World, to be exact. Food company Kellogg’s opened the snack food’s flagship Times Square location today at 8:30AM, a 3,000 square foot monstrosity filled with “interactive Pop-Tarts-inspired features.”

The location in part comprises a “multi-sensory café” which serves Pop-Tarts toaster pastries, Pop-Tarts-inspired snacks, assorted bakery items and customizable ice cream creations. Customization seems to be a theme here, with a “varietizer” machine that lets customers build their own take-home box of Pop-Tarts pastries as well as a t-shirt making station.

Perhaps they were influenced by Disney’s new Apple-consulted stores, with several video stations that offer interactive entertainment, obviously tied into various social media to let the rest of the world know how ridiculous it is that such a place even exists! Indeed, the 50-foot storefront and a six-story billboard remind us of this much, being plastered with Pop-Tarts branding.

“The billboards cost as much as the retail space,” Faith Hope Consolo, chairwoman of the retail leasing at Prudential Douglas Elliman, told the Times. “It gives them a visibility that they can’t get anywhere else.”

Finally, the store will stock diverse Pop-Tarts merchandise, including clothing, coin purses, key chains, mugs, magnets, pillowcases, posters, recycled tote bags … and chapstick?! First: The depth of obsession required to sleep on a Pop-Tarts pillow is unfathomable to me; this is coming from somebody who drapes a banner of the Horde (Warcraft) over his own bed, so you know it’s real bad. Second: We wonder if the chapsticks come in Frosted S’Mores and Frosted Wild! Grape flavors.

And if none of that sold you, then how about the hourly light show that simulates the look of frosting! Or how about their new menu selection of Pop-Tarts Sushi — three flavors of Pop-Tarts minced and then wrapped together in a delicious fruit roll-up (sake and soy sauce optional).

It might be a good time now to note that Pop-Tarts are perhaps one of the unhealthiest snack foods to exist. Last year, Fooducate broke down the pastry’s ingredients, and concluded:

“This product should not exist in Obese America 2009. The light fortification with various vitamins and minerals cannot compensate for the sugar overdose, lack of fiber, and overwhelming use of additives, preservatives, and artificial food coloring.”

But the product has survived — over 40 years, in fact. The Times writes that “the Kellogg’s version took off, in part because of its name, which reflected the growing Pop Art movement.” So here we have Pop as its glorious height. Plus, they have Pop-Tarts-themed chapstick! Chapstick!