Shockwave Generator Could Be Future of Cars | The Mary Sue 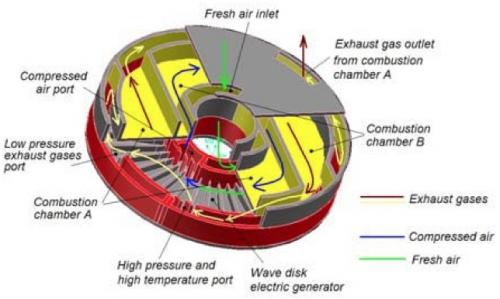 Dr. Norbert Mueller at Michigan State University wants to radically change what your car looks like under the hood with a “shock wave generator.” His creation is the wave disc engine, which replaces much of the traditional engine block with a component the size of a stack of dinner plates.

Here’s how it works, from Popular Science:

It consists of a rotor carved with wave-like channels. Fuel and air enter through central inlets, and the rotor spins to block their exit through a separate outlet. The sudden build-up of pressure generates a shock wave, compressing the mixture. Then it’s ignited, and as the rotor keeps spinning, the outlet opens again to let the hot gases escape

Mueller envisions his wave disc motor powering a generator, making it an ultra-light ultra-efficient hybrid electric vehicle. That’s a lot of ultras, but Mueller says he has the numbers to back it up. The wave disc apparently uses 60% of its fuel for propulsion, compared to 15% of fuel used for propulsion in conventional engines. And because the wave disc powered cars would be much lighter — perhaps 20% lighter — the fuel efficiency is even greater.

This all might seem very pie-in-the-sky, and that’s quite understandable. However, Mueller’s team has received $2.5 million in federal dollars from the Advanced Research Projects Administration – Energy (ARPA-E), which will be put towards creating a 25kw engine perhaps as early as next year. According to Mueller, that’s enough power to run an SUV.

I’m hoping Mueller’s checked his math on this, because I am very excited to have a car running on something as efficient as it is elegant. Below, watch Mueller explain his creation, and casually wave around his breakthrough technology while he gesticulates.

(PopSci via Geekologie, image via Physorg)