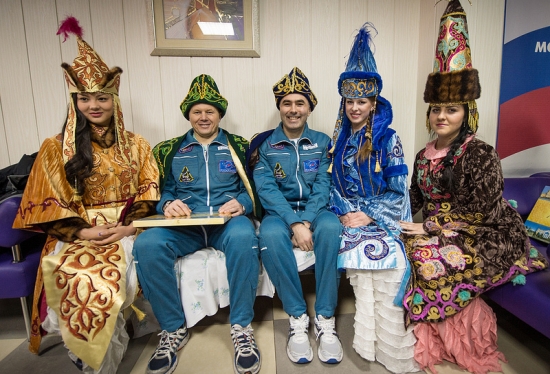 The International Space Station’s Expedition 34 came to a successful end on Saturday when three members of the crew safely touched down near the town of Arkalyk in Kazakhstan. Shortly after landing, the crew was greeted at Kustanay Airport by women who appear to be cosplaying as pretty obscure Kazakh folk characters, making this a picture that exists.

The two crew members pictured above are Russian cosmonauts Oleg Novitskiy (left) and Evgeny Tarelkin (right). Novitskiy was the Soyuz Commander of the mission, and Tarelkin was the Flight Engineer. Not pictured is Commander Kevin Ford, who probably feels pretty left out. The three men spent 144 days in space as part of Expedition 34, all but two days of which was aboard the ISS.

The women in the picture are in fact dressed in ceremonial Kazakh garments, and I think it’s pretty cool that Kazakhstan has a whole ceremony to welcome people back to Earth after they’ve been in space.

Now that Commander Ford is back on Earth, it means that Canadian astronaut and all-around cool guy Chris Hadfield takes control of the space station for Expedition 35. We just hope his new duties as commander don’t interfere with him being awesome in space by doing things like recording space songs and talking to William Shatner.

(via NASA, image via NASA/Bill Ingalls)