If Your St. Patrick’s Day Plans Were to Record “Danny Boy” in Space, Chris Hadfield Beat You to It 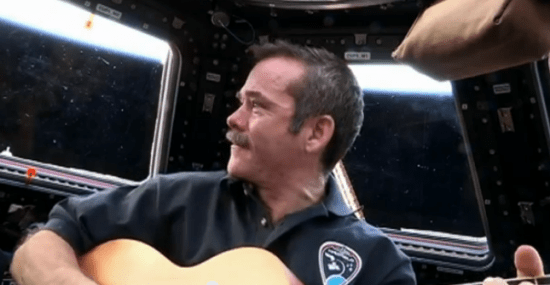 “From high above the world to the Irish everywhere, Happy St. Patrick’s Day,” said Commander Chris Hadfield at the start of his recording of “Danny Boy” released today on Soundcloud. It’s the first time the song has been recorded in space, and the latest in a long line of remarkable things Hadfield’s done during his time in space. I don’t even like the song “Danny Boy” and I can’t stop listening to this.

This isn’t the first song recorded in space, although that honor also belongs to Hadfield and his original song “Jewel in the Night“, which is also quite lovely:

As with anything, there are some additional challenges to playing a guitar in zero gravity, although they don’t seem to stop Hadfield from doing it. Besides these two songs, he’s also jammed with the Barenaked Ladies from the ISS, and has said he wants to record a lot of music during his time on the space station.

So what are the challenges with playing a guitar in space? Hadfield talks about them in this video, shot at the factory where his space-guitar was built:

At some point today, while you’re out partying and celebrating offensive Irish stereotypes, take a minute to stop and remember the fact that there are people in space, one of them has a guitar, and he’s great at it.