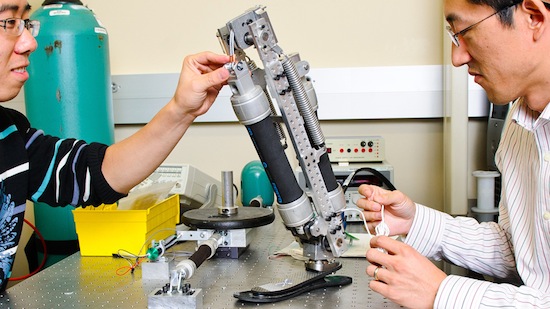 The world of prosthetics is reaching critical turning point. Though the goal in the field has always been to replicate and replace human limbs as accurately as possible, we’re now able to see a future where mechanical enhancements may make people stronger and faster than when they were whole. There’s no reason why prosthetic-wearers shouldn’t be allowed to live as discrete super-human cyborgs, though. Researchers at the University of Alabama are trying to make their new rocket-powered ankle more discrete than those controversial prosthetic blades from a few years back.

Most prosthetic leg-wearers are forced to make a choice when picking an artificial limb: Either choose a light, inanimate object, or an extremely heavy model that features a motor and power supply able to simulate the action of taking a step. The designers behind the rocket-powered ankle are trying to make the best of both worlds, building a lightweight frame that can house something powerful enough to generate a natural-feeling walking motion.

The key to making a lighter self-propelled prothetic, it seems, is actually the fuel. The “rocket-ankle” uses a special liquid fuel called “monorepellant,” which can be activated with only a very small amount of catalyst. The minimalistic fuel-type cuts out a lot of the mechanical elements that weigh down most active prosthetics. The ankle also uses a sleeve muscle actuator, an artificial muscle designed to allow for a more natural-feeling stride.

Of course, there are still problems. For starters, the ankle produces a fair amount of hot exhaust. The device also may or may not have a tendency to overheat, which I would assume can get pretty uncomfortable. According to the University, designers hope that the leg will be at least theoretically functional, if not actually in use, by 2016. More importantly, the designers say that, for better or worse, the ankle is being built to simulate human motion, and not turn people into cyborg super-heroes.

(University of Alabama via Gizmodo)