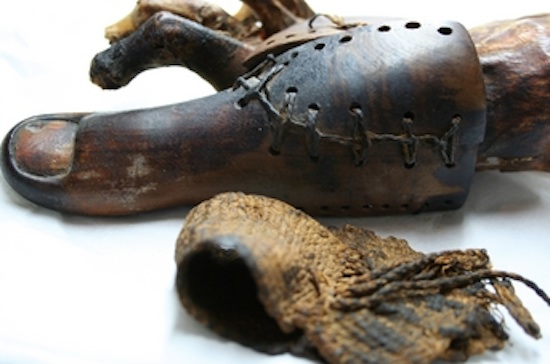 Researchers at the University of Manchester have proven that a pair of false toes found in Egyptian archaeological sites weren’t just for looks. Modern tests on replicas of the ancient replacement digits show that they really do help people walk, confirming their status as the world’s first prosthetic devices and pushing back the timeline on mankind’s development of convenient spare body parts — because hey, some people are gonna lose a toe — as much as half a century.

Initially discovered in 2011, the pair of false toes — one of which was discovered on a female mummy — were thought by many to be functional prosthetics, but the jury remained out, as the lack of evidence and data meant the toes could also have been simply very fancy cosmetics. Hey, if you walked around the dessert in sandals all day, you’d be sensitive about the way your feet looked too, right? The elegantly carve mummy toe, in particular, could have been a late-in-the-game addition for an Egyptian lady who didn’t want to show up in the afterlife missing a toe, because how gauche, right?

To determine what purpose the toes really served, researchers built replicas of the prosthetics. One a simple stub built of glue, plaster, and linen, the other a more detailed and aesthetically pleasing wood and leather number with a carved toenail and everything. Both toes were tested on volunteers whose right big toes went to market one day and never came back, and both performed admirably as replacements, returning up to 87% of the flexion produced by their natural left toes.

Interestingly, the toes seem to have been designed to work with sandals worn in Egypt at the time, which the University of Manchester team also replicated. Not only was walking in the sandals without a prosthetic particularly uncomfortable for test subjects, but the prosthetics actually performed better in tests where participants were wearing sandals, rather than walking barefoot. That specificity lends even more support to the fact that these toes represented the first successful attempt to craft artificial body parts for humans.

(via Eurekalert, image courtesy of University of Manchester)