That's seriously what the research team said. We couldn't make this stuff up. 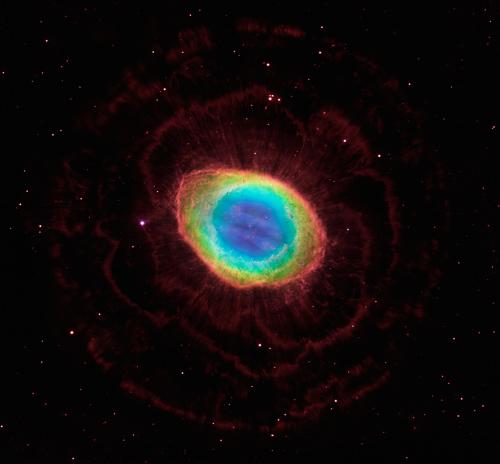 You’ve no doubt seen images of the Ring Nebula before on college textbooks and astronomy websites. After all, it’s so pretty looking! Astronomers have long theorized that the gas emitting from this dying star gives it a rounded, hollow shape like a bagel or a ring, but new images captured by the Hubble Telescope reveal that the Ring Nebula is actually denser in the middle than previously thought.

Or, as C. Robert O’Dell of Vanderbilt University puts it, “It’s like a jelly doughnut because it’s filled with material in the middle.” Delicious.

O’Dell currently leads a research team in Nashville, Tennessee that uses both the Hubble Telescope and the several ground-based telescopes to get the best view of this amazing cosmic entity. “With Hubble’s detail, we see a completely different shape than what’s been thought about historically for this classic nebula,” O’Dell said.

The Ring Nebula is 2,000 light-years from Earth and about 1 light-year across; it began to die about 4,000 years ago and will continue to expand for another 10,000. The different colors of the nebula represent the different gases that make up its shape. O’Dell’s team suggests the rings wrap around a blue football-shaped mass of helium, and that there are also small irregular knots of dense gas along the ring’s inner rim.

Astronomers hope that by studying the shape and expansion of the Ring Nebula, they will learn more about how our Sun might eventually explode and die out 6 billion years from now. They have assured us, however, that the Sun’s demise won’t be as pretty to look at because it’s not as big. Oh well. At least none of us will be alive to be disappointed by it.