RiffTrax Wants to Make Fun of Twilight in Theaters, We Want That Too 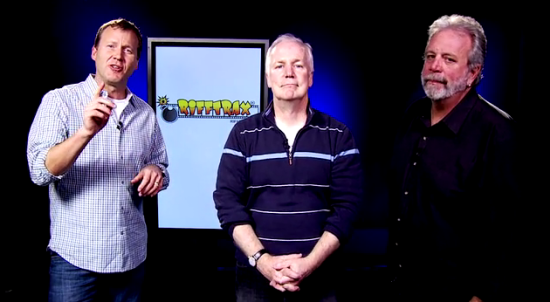 In the not too distant future, somewhere in movie theaters, Mike Nelson and his RiffTrax pals could be making fun of Twilight live for your entertainment. That’s right, the RiffTrax team wants to do another of their simulcast live events where they make fun of a movie, and they want that movie to be Twilight. To do that though, they have to acquire the rights to the film, which can be expensive. They’ve launched a Kickstarter campaign that is already over three times its goal, but that still might not be enough to make this happen — and I really, really want this to happen.

If you’re not familiar with RiffTrax, it is basically the modern incarnation of Mystery Science Theater 3000, and if you’re not familiar with MST3K, then I’m sorry for your life choices, but I can’t do anything for you. Former host of the show Mike Nelson is joined by the voices of Tom Servo and Crow T. Robot — Kevin Murphy and Bill Corbett respectively — to form RiffTrax. They release audio tracks of themselves and guests making fun of movies that you can listen to while you watch that movie, and sometimes it almost feels like you’re watching MST3K again.

The Kickstarter goal was $55,000 and they’ve already tripled it with 26 days to go. Money might not be the issue though. For the RiffTrax team to get the rights to Twilight, they have to negotiate with Summit Entertainment and Lionsgate, and given the nature of what RiffTrax does, they might not be able to reach a deal at any price.

Why Twilight? Because it’s the Worst Movie Ever, of course. That’s not my opinion. RiffTrax did the research. They asked their fans to decide the worst movies of all time, and over 500,000 votes were cast. Twilight was the clear winner. Regardless of how you feel about Twilight, having Mike Nelson, Kevin Murphy, and Bill Corbett make fun of things is the best, so I think even fans of the movie can get behind this thing.

If you’re not sure you’d like this, then you’re in luck. They’ve already recorded a full riff of Twilight that you can download from their website for a few dollars. Still not sure? Here’s a preview:

So what happens if Summit and Lionsgate say no? Then the RiffTrax team will work their way down the list, approaching studios with the money until they successfully license the biggest/worst movie they can. Honestly, after reviewing the list, I kind of hope Summit and Lionsgate do turn them down. Number two on the list is Batman and Robin, and I’d love to seem them rip that thing to shreds live.