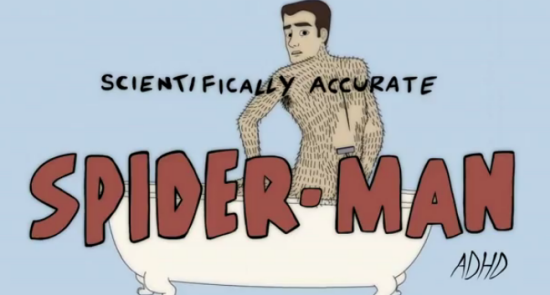 Earlier this week we looked at a paper that examined the physics behind the train stop scene in Spider-Man 2 that put a little science before our friendly neighborhood Spider-Man, but that clearly wasn’t enough for the people at Fox’s Animation Domination High Def. They went a few steps further to create Scientifically Accurate Spider-Man to give us a look a what a real man/spider hybrid would look like, and it isn’t pretty. It’s also not safe for work, unless your work is writing about weirdly graphic Spider-Man parody cartoons. Then you’re probably fine.

There’s a lot of things about Spider-Man that don’t make scientific sense that we just kind of accept because the alternative is too bizarre. One example is that spiders don’t shoot webs from their wrists, they shoot them from the general vicinity of their butts. Those little hairs Spidey uses to climb walls? They’d be all over his body, not just his hands and feet.

Basically, if your genes were mutated with spider DNA you would turn into a monster, not a superhero. Take a look at the results, and again, unless your job is pretty awesome, this is probably not safe for work.