The transition from bizarre to frightening has been swift. 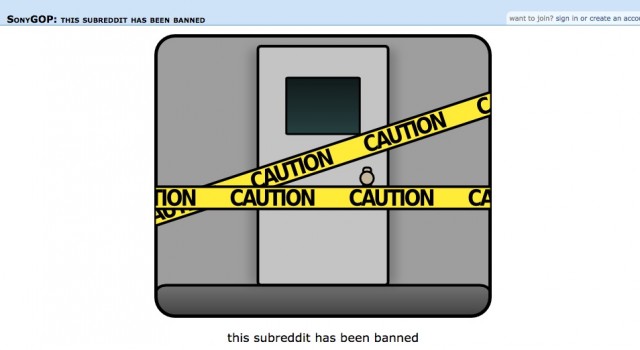 Whether or not we’ve let the hackers win is kind of up to Sony at this point. With the biggest theater chains deciding not to show the movie, another option could be going the digital distribution route, which would get around the threats on movie theaters and has been picking up steam with other movies lately. I doubt The Interview is the kind of movie that really benefits from showing on a giant theater screen to begin with.

[Original Post] The Sony Pictures hack has brought out emails, full movies, and personal information of Sony employees, and things still appear to be escalating. Most recently, threats were made involving violence at screenings of The Interview which resulted in the New York premiere’s cancellation. Now, Reddit moderators have finally started cracking down on those sharing files obtained through the Sony hack.

As interesting as a lot of the information brought out by the hack has been, it has largely come from leaked emails with disregard for the privacy of those who sent them. To make matters worse, personal data of Sony employees has also been released by the hackers, which has already resulted in a lawsuit on Sony’s hands.

To try and minimize the damage, Sony has been sending Digital Millennium Copyright Act notices to organizations asking them to stop posting information from the leaks and delete any copies of leaked files. Business Insider reports that over 100 terabytes of information were stolen, and 200 gigabytes have been shared so far by the hackers. Reddit informed Business Insider that they’ve complied with the requests and banned the SonyGOP (the hackers go by the name “Guardians of Peace”) subreddit where links to the stolen files were being organized.

That’s good news, as it’s becoming increasingly clear just how malicious this cyber attack is. Most recently, the New York premiere of The Interview was cancelled after threats of violence claiming to come from GOP. The threat reportedly came alongside another batch of leaked emails sent to journalists, so if the emails turn out to be genuine, it’s likely the threat does come directly from the hackers involved in the attack. According to The Verge, the threat reads,

Warning
We will clearly show it to you at the very time and places “The Interview” be shown, including the premiere, how bitter fate those who seek fun in terror should be doomed to.
Soon all the world will see what an awful movie Sony Pictures Entertainment has made.
The world will be full of fear.
Remember the 11th of September 2001.
We recommend you to keep yourself distant from the places at that time.
(If your house is nearby, you’d better leave.)
Whatever comes in the coming days is called by the greed of Sony Pictures Entertainment.
All the world will denounce the SONY.

For those of you unaware, The Interview is a Seth Rogen/James Franco comedy about an assassination attempt on North Korea’s Kim Jong-un, which North Korea already promised would receive a “resolute and merciless” response if it were released. Their government has claimed not to be involved in the Sony hack, but there’s been evidence they might be, and they certainly aren’t upset it’s happening.

The movie’s LA premiere proceeded without any trouble, but its New York premiere has been cancelled due to the threats, and Sony has left it up to individual theaters to decide on their own whether to show the movie as planned beginning on Christmas day. So far, USA Today reports that Carmike Cinemas, with 278 locations across the country, has decided to opt out of showing the film.

USA Today also says that federal officials are close to positively identifying who is behind the hack, and the threats have only made it easier for the government to get involved in those efforts. Security expert Philip Lieberman, president of Lieberman Software Corporation, told them, “Up to now it was about money, revenge, etc. With this posting, the U.S. government can now get involved in a major way.” Hopefully that means this will all be over soon.

(via The Verge, image via screencap)