Pope Quest: The Legend of Francis Shows Why No One’s Ever Made a Pope Video Game [Video] 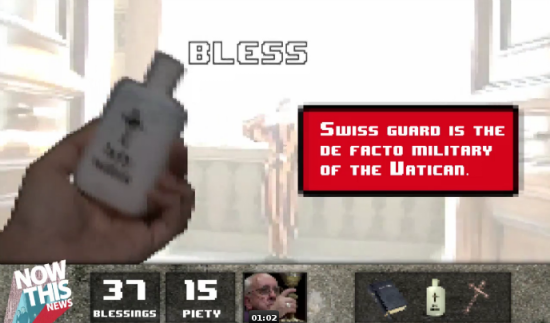 Yesterday, as the news of the Catholic Church electing their new pope, Pope Francis, was announced, a lot of people were probably wondering what the whole process of electing a pope would look like as a video game. Okay, probably not a lot of people, but at least one person thought that because they made this video that looks at the process as if it were a first-person blesser. We give you Pope Quest: The Legend of Francis!

So what would a pope game look like? Check out this video by Now This News and find out:

Probably not as action-packed as most gamers would like, but at least the little pop-up facts are educational.

While it’s unlikely that anyone will actually make a pope video game, seeing a quick little video of what one might look like is at least entertaining. It does raise the question of what a game designer would have to do to make the Pope’s job seem game-worthy. Grand Theft Auto style Popemobile game?

(via Now This News)