What Happens When The Pope Resigns | The Mary Sue

Does The Pope Quit in the Woods? Benedict XVI Resigns, Here’s What Happens Now 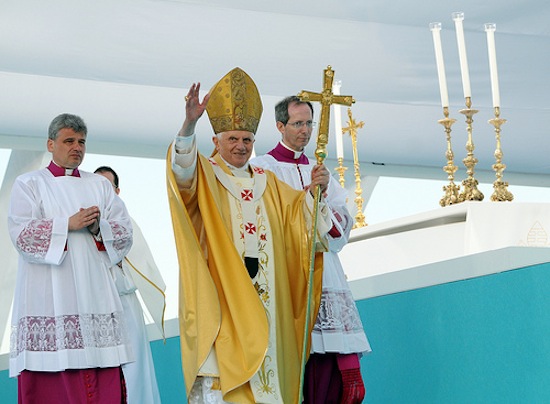 Pope Benedict VXI has shocked the world by resigning this morning, citing the ravages of age and poor health that, he feels have begun to prevent him from carrying out the duties of the office. While the office of Pope is not necessarily a lifetime appointment, stepping down from the post is exceedingly rare, and has been unheard of for the last 600 years.  The 85-year-old pontiff will continue poping it up — the technical term for serving as Holy Father of the Catholic Church — until the end of the month, while the College of Cardinals convenes to find his successor. Here’s how they’ll do it.

To select a successor, the College of Cardinals — a group of high ranking church officials, not Stanford — will come together to form a papal conclave, the Catholic church’s answer to Voltron, except that instead of fighting off giant aliens, it chooses popes, which is also important. Once formed, the College, which consists of as many as 120 cardinals of the Church, will be sequestered in the Sistine Chapel in Rome, which is pretty nice digs, as far as being sequestered is concerned. No one will be allowed to leave until a new Pope has been elected.

Since it’s done behind closed doors, fairly little is known about what the campaigning and horse-trading of a papal election looks like. We know that cardinals who were elevated to the position after turning 80 are not eligible to vote in the conclave, which is the process the College is most known for. Ballots are cast in the strictest of secrecy, with each cardinal writing his selection for the office down on a piece of paper. The votes are then tallied and, since a pope needs a two thirds majority to be selected, that usually means another vote is taken. In the first three days of voting, 4 votes take place each day. If a pope hasn’t been selected by the end of the third day, a short break is taken before seven more round of voting, followed by, if necessary, another short break and another seven voting rounds. If a pope still hasn’t been chosen by this point, the process becomes a runoff between the two candidates who have received the most votes thus far, pretty much because by that time everybody is tired of hanging out in the Sistine Chapel and just wants to go home, and dang it, somebody has to be pope, after all.

The outside world is kept abreast of the decision making process by smoke issuing from the conclave’s residence — dark smoke means no pope has been chosen, while white smoke means that a new pope has been selected to lead the church. Red, green and purple smoke, meanwhile, demonstrate that one of the cardinals has gotten bord and cracked open the Vatican’s noted fireworks stores, though historians differ on how to read this sign.

It remains to be seen how Benedict XVI’s resignation will affect the timing of this process, which was initially put in place to prevent long papal vacancies. The process may even be a little faster than usual, as the traditional period of mourning can be foregone, since the pope has resigned, rather than passed away, and it’s though that a new pope should be in place by the middle of March or so.

While he has cited his health as the main reason he is stepping down, Benedict has presided over a tumultuous era in church history, marred by multiple sex scandals and seeming cover ups by church officials. While the job has certain benefits, like a great hat and plexiglass car, frankly, no one could blame an 85-year-old man for not wanting to have to deal with yet another sex scandal in his time.