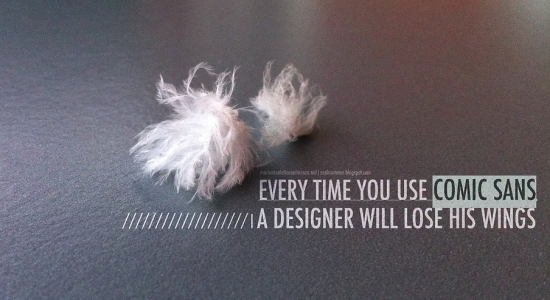 While the Vatican convenes to find a new pope, maybe they should also consider looking for a new graphic designer. Their new eBook about the recently retired pope titled Benedictus XVI is a 62-page photo essay of the former pope doing pope stuff with captions written in Comic Sans. There’s no better way to get the message out that you haven’t lost touch with the modern world than by writing that message in the most universally reviled font in existence.

Besides the Comic Sans captions, the book also features many pictures watermarked with copyright notices written in Papyrus, another font that designers love to hate, and the one I’d actually put ahead of Comic Sans as “Worst Font to Use for Anything Ever.”

As best as I can tell, the eBook doesn’t make use of Wingdings anywhere, but in the interest of time I only gave it a cursory read. I would feel bad about not spending more time reading through it, but considering it’s in Comic Sans, they clearly spent about as much time putting this together as I spent looking at it.

You can read the book on the Vatican’s website, which I was surprised to find not hosted on Angelfire.