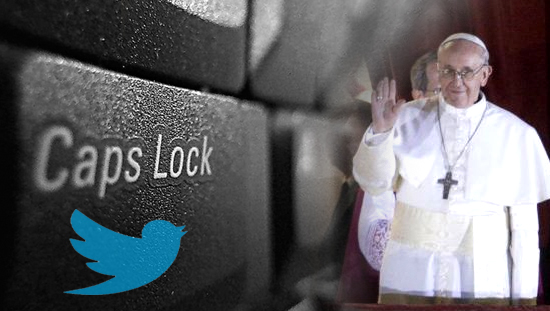 The Holy Smoke Monster has spoken! Rather, the white smoke issuing from the Sistine Chapel announced that a new Pope has been chosen. But more importantly, the Bishop of Rome and successor of Saint Peter has returned to Twitter — the modern-day proverbial mountain from which all things are shouted. And shout Pope Francis I does, with ALL CAPS, in tweet #1.

With the spewing of white smoke — a mixture of lactose, potassium chlorate, and pine resin —  it was announced that the new Pope was chosen, but this tweet makes it so. With already 1.7 million followers, it’s clear the Pope has been rebooted. Reloaded. Raring to go.

Once he was Cardinal Jorge Mario Bergoglio of Argentina, and now he’s Pope Francis I. Already he’s breaking records: He’s the first South American, first non-European, and the first Jesuit to take the Vatican balcony.

Being Argentine, I’m also assuming Francis I is a fan of fútbol — or soccer, for the laymen — and that he’ll be sipping Yerba maté and snacking on alfajores while he tweets. My Catholic wife is Argentine/Italian, so I sort of have the inside scoop on these sort of things.