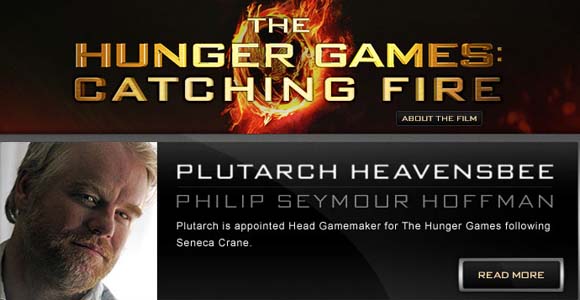 Previously, producers had told fans to take a breather when it came to casting rumors but in this case, they were 100% true. Philip Seymour Hoffman has been cast as Plutarch Heavensbee in The Hunger Games: Catching Fire!

We were actually pretty excited when we first heard Hoffman might take the role.

E! Online quoted a source who tells them the deal was finalized around the Fourth of July. But if you still feel skeptical, don’t worry. Hoffman is now pictured on the movie’s official Facebook page. The producers said they “are pleased to announce that Philip Seymour Hoffman has been cast in the role of Plutarch Heavensbee, Head Gamemaker for The Hunger Games, in the much anticipated film adaptation of Suzanne Collins’ worldwide smash hit novel Catching Fire.”

If you click over, you’ll notice Hoffman is the first new cast member to  land a role. Director Francis Lawrence is taking the helm this time with stars Jennifer Lawrence, Josh Hutcherson, and Liam Hemsworth (and others) returning. Plutarch should have been in the first film but it’s not a big deal that he was left out, his important work is yet to come.

There’s been tons of speculation as to who will play Finnick Odair in the film but there’s still no official word on that. We also had a few names thrown out for Johanna Mason, with Jena Malone seemingly taking the lead.

Here’s the official synopsis for the film, under a spoiler cut in case you haven’t read the books:

“THE HUNGER GAMES: CATCHING FIRE begins as Katniss Everdeen has returned home safe after winning the 74th Annual Hunger Games along with fellow tribute Peeta Mellark. Winning means that they must turn around and leave their family and close friends, embarking on a ‘Victor’s Tour’ of the districts. Along the way Katniss senses that a rebellion is simmering, but the Capitol is still very much in control as President Snow prepares the 75th Annual Hunger Games (The Quarter Quell) – a competition that could change Panem forever.”

So, are you happy with this casting news? Who do you think they will announce next?