You May Breathe Easy – Robert Pattinson Says He Won’t Be Playing Finnick In The Hunger Games: Catching Fire 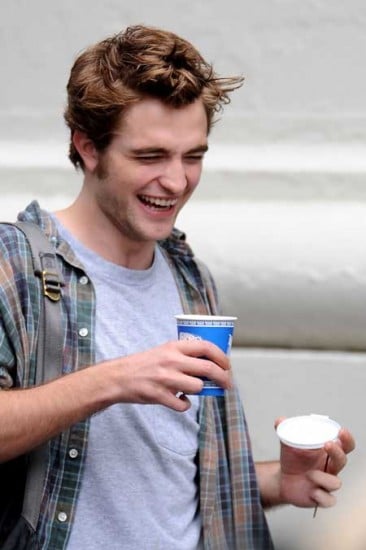 Last week we freaked a bunch of you out over the mere notion that Twilight star Robert Pattinson might take on the role of Finnick Odair in The Hunger Games: Catching Fire. Those of you who were squarly against the idea can now relax, Pattinson himself has told the press he is not up for the role, and quite possibly offended that he wouldn’t even be considered. Also, Kristen Stewart and Jennifer Lawrence may be up for the same role. Prepare to hear that overly dramatized for the next few months…

Pattinson did an interview with USA Today in which he mentioned waking up the morning after the Cannes Film Festival premiere of his new film Cosmopolis and seeing the news of him being considered for the Catching Fire role. And having heard nothing else on the subject, thought it might be true.

“I woke up this morning and saw all these things about me being cast in The Hunger Games,” Pattinson told the paper. “I was kind of curious for a second. So I called my agent.”

Finnick is the extremely popular and attractive District 4 competitor in the games who’s described as tall, muscular, athletic, with tan skin, bronze-colored hair, and sea green eyes. But fans were against Pattinson not only because they felt he didn’t physically fit the role, but mostly because they just didn’t like him or his Twilight connection. The hashtag #PattinsonisnotFinnick has been trending on Twitter all while the actor received a standing ovation at Cannes.

Pattinson checked in with his agent that day to see if the Catching Fire rumors had any truth to them and his response was an unequivocal “no.”

“(My agent) was like no one’s going to offer you that part,” Pattinson said while laughing. “I was like, thanks for the reassurance.”

Pattinson didn’t actually say whether he wanted the role or not but at least he didn’t find the notion as ridiculous as most of the public.

Meanwhile, Pattinson’s Twilight co-star and girlfriend Stewart is vying for a role against The Hunger Games’ Lawrence. The role in question? Peyton Loftis in an adaptation of William Styron‘s book Lie Down in Darkness. It’s about a psychologically unstable woman and her dysfunctional Virginia family.

“I want to play Peyton more than anything I can possibly taste or touch in my life,” said Stewart recently in Elle Magazine.  Then, in W Magazine, Lawrence said, “I want to play her so bad. I am obsessed with that part. I have this feeling of protectiveness over characters I want to play… If someone else gets the part, I’m afraid they won’t do it right.”

This…is going to get nasty in the press and watch, neither of them will wind up getting it.

(via The Hollywood Reporter, Jezebel)