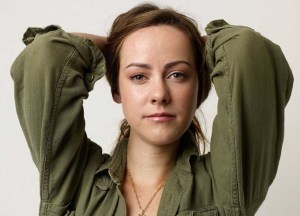 If we are to believe The Hollywood Reporter, then it looks like Jena Malone (Hatfields & McCoys, Sucker Punch, Donnie Darko) will be playing the key role of tribute Johanna Mason in Catching Fire and Mockingjay. And we all know what that means, since we already know Jena Malone is sufficiently badass — will her introduction in the (PG-13) movie be the same scene we read about in the book?

After about a week of back-and-forth between no less than three contenders for the role, it looks like Malone beat out Zoe Aggeliki and Mia Wasikowska (whose names I am not ashamed to say that I cut and pasted) to play the victor from District 7 who was re-reaped for the Quarter Quell. You know, the one with the “wicked ability to murder.” While I’m sure that Aggeliki and Wasikowska made their cases, I personally really like Malone for this a lot more, and I think this is a pretty cool choice. (And she looks pretty perfect with her hair short and spiky, like Johanna’s is said to be.) Malone is said to have been officially offered the role and is “in early negotiations.” (Meaning that it’s hers if she wants it, and she’ll want it if she can work out a good deal, which is very likely to happen.)

A former child star, Malone has played her share of angst and quirk, and now she will head directly into Johanna Mason’s famous tree costume. The one she strips off right before meeting Katniss, leaving her naked except for her green slippers. We all know Joanna is a pretty kickass character, but this is quite a first impression for a character to make in a young adult novel. The thing with the novel is that there were no pictures in it, and people are a bit less puritanical about descriptions of a naked young woman than they are about actually seeing one on screen. Because, as we know, this is way more offensive than teenager murdering each other for a government’s entertainment.

Of course, there is probably also a way to show Johanna standing in front of Katniss (Jennifer Lawrence) and Peeta (Josh Hutcherson) in all her natural glory without showing it all on camera with implied nudity. But we’re sure there will be plenty of stories about this as the movie starts shooting. In the meantime, I can’t wait to see Jena Malone wielding an ax. That is going to be amazing.