Public Service Announcement: You Can Play Chex Quest 1, 2, 3 for Free 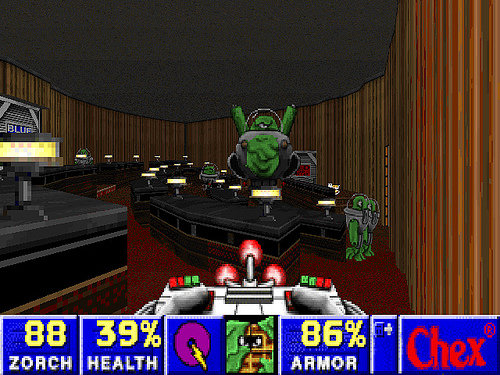 If you had a good childhood, you’ll remember playing Chex Quest. If not, it’s a weird, non-violent first-person shooter running on the Doom engine that, as you may have guessed, featured a lot of Chex cereal themes. The original game was a promotional item that could be found in boxes of Chex cereal, and happened to be the first video game to be included with a box of cereal. Turns out you can download and play all three Chex Quests for free, right now, assuming you have a computer on which to do it. Why wouldn’t you want to? The game’s hero is the Chex Warrior, a human-like creature in an anthropomorphic piece of Chex cereal armor. I mean, c’mon.

If you’re wondering how a non-violent FPS works, the Chex Warrior shoots the enemies, the slimy Flemoid creatures, with a “Zorcher,” which teleports things instead of blowing their guts all over the place. You should watch this short video of the first level in Chex Quest so you know what you’ve been missing all your life:

Though the ZIP file is labeled as Chex Quest 3, never fear, as all of the previous games are included.