Play Physical Chess Over the Internet With Robotic Chessboards 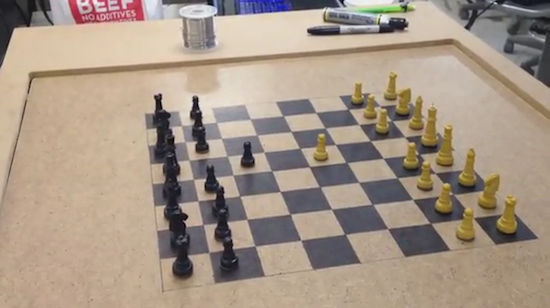 Even though digital chess played over the Internet has been a common occurrence long before even phones and video game consoles were adept at accessing said Internet, there’s still something special about playing chess on a physical chessboard over the Internet. Especially when your opponent’s pieces move without any kind of physical interaction. YouTube user FunGowRightNow12 created just this type of chess set, with the much larger goal of enabling people to play board games with each other across the world, regardless of physical location.

Rather than having both boards communicate with some kind of computer program that then digitally displays the pieces’ movements, the chessboards hide a laptop and electromagnet each, and with their powers combined, can detect the pieces’ movements then communicate to the other chess set and physically move the pieces. In order to detect the pieces, an 8×8 grid of reed switches open and close with the magnets put in the bottom of each chess piece.

And a video of the chessboards’ guttyworks:

Though play-by-email has experienced a recent resurgence with popular mobile games that employ the method, such as Words With Friends, Hero Academy, and Draw Something, it’s a lot more interesting when you leave your home for the day then come back later after work and discover your physical chess set has magically moved its own piece.