Someone Made 3 Person Chess, Like in The Big Bang Theory 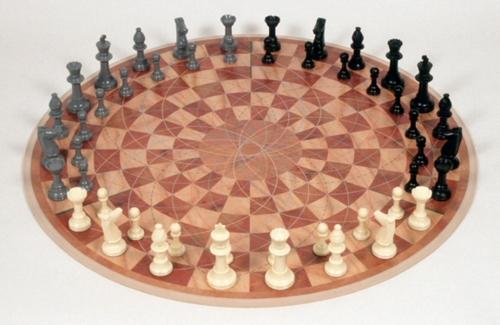 Character Shelden Cooper on the sitcom The Big Bang Theory invented a game of three person chess that contained two new pieces with a very particular set of rules. Whether or not one happens to find The Big Bang Theory a laugh riot or mind-numbing skull-drivel that makes one swear off television because it’s so bad that it makes other shows bad by proxy, three person chess is awesome.

The rules of the non-sitcom three man chess are fairly simple, and they basically amount to “regular chess but with another person.” Most of the additional rules — aside from the addition of border control rules — are simply guidelines regarding how to deal with the circle in the center of the board, and they generally result in “just ignore it.”