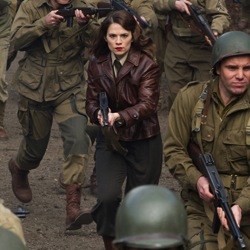 There’s been an online campaign for Peggy to be featured. People really liked her. So Marvel have made sure that as part of Comicon there will be a little kind of snapshot as to what Peggy’s actually really capable of, which was finished here and which was great fun. Hopefully, it will lead to other things. — Peggy Carter actress Hayley Atwell to The Age.

Marvel Entertainment has shown an interest in giving short films to secondary characters, and have already dedicated one to a fan favorite. Peggy Carter is a character who has yet to be given a kind of closure by either Captain America: The First Avenger or The Avengers (even considering deleted scenes), so it makes sense that they might give her some in a short. In the Age article the actress also confirms that she’d be totally down to play Lara Croft in a Tomb Raider movie, so that’s awesome.