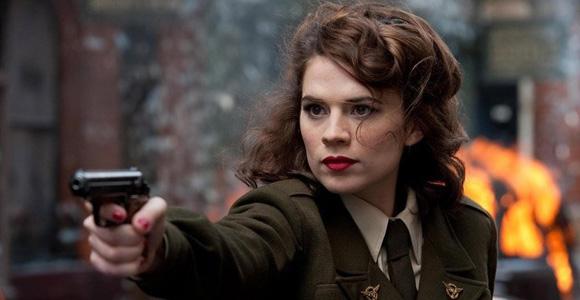 Hayley Atwell, the British actress who depicted Peggy Carter in last summer’s Captain America: The First Avenger, won’t be appearing in The Avengers this year but she’s already got her sights set on stepping back into the role. And hopefully getting to shoot a lot of really big guns.

In a recent press junket for the DVD release of Captain America, Atwell was asked if she had a role in The Avengers. “Unfortunately not. I think I can say that quite safely now. I imagine filming has wrapped on that, so I haven’t been part of that project at all,” she said. “There are fans of the comic and of Peggy and Steve’s relationship that would probably want to see more of that, but for me as an actor it frees me up from a franchise. It frees me up creatively from being too established as one particular role, which gives me more creative freedom. At the moment I’m looking at it in that positive light, because I have to. I’ve got no choice.”

Even though she may be worried about being typecast, that won’t stop her from saying yes if they asked her back for Captain America 2. “I haven’t heard anything; I haven’t been approached. Of course if they were to bring me back or ask if I was interested, I’d definitely love to go back and revisit that role and develop her. That would be wonderful.”

Unlike some actors who may pretend when they land comic book roles, Atwell never led anyone to believe she knew who Cap or Peggy were when auditioning. “I’d no idea who Captain America was, so I came to it completely fresh. I made no secret of that to the director in the audition. I don’t think it got in the way.”

And her audition and training for the role were particularly rigorous. “[I] had to learn an unarmed fight sequence and how to load guns and unload them so it looked convincing. They put you through your paces, which I loved and rose to the challenge of that,” she said. “I did six days a week with an ex-Marine for two-and-a-half months, and I dropped a couple of dress sizes, but more importantly, I was just very strong.”

And for the record, we’re really hoping this is on the DVD extras: “There’s a lot more action sequences that didn’t make it into the final cut, but it involves me walking around with a real heavy machine gun for a lot of time.”

One of Atwell’s next roles is rumored to be that of a heroine named Sara in The Return of Captain Nemo, a sequel to 20,000 Leagues Under The Sea, which is described thusly on imdb: “Adventurer Captain Nemo joins forces with President Ulysses Grant to battle an evil genius who is causing naval disasters.” Cross your fingers for a giant, steampunk octopus.